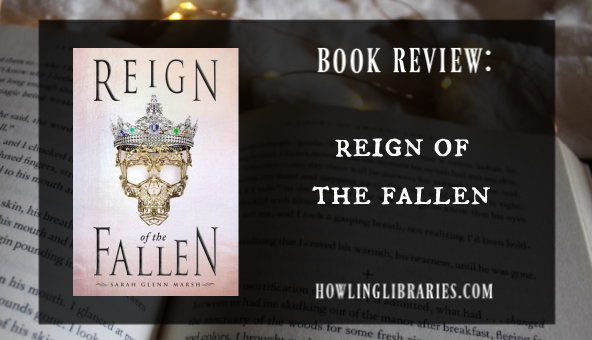 TITLE: Reign of the Fallen
AUTHOR: Sarah Glenn Marsh
RELEASES: January 23, 2018; Razorbill
GENRE: Fantasy
AGE RANGE: YA
SYNOPSIS: Odessa is one of Karthia’s master necromancers, catering to the kingdom’s ruling Dead. Whenever a noble dies, it’s Odessa’s job to raise them by retrieving their souls from a dreamy and dangerous shadow world called the Deadlands. But there is a cost to being raised–the Dead must remain shrouded, or risk transforming into zombie-like monsters known as Shades. If even a hint of flesh is exposed, the grotesque transformation will begin.
A dramatic uptick in Shade attacks raises suspicions and fears among Odessa’s necromancer community. Soon a crushing loss of one of their own reveals a disturbing conspiracy: someone is intentionally creating Shades by tearing shrouds from the Dead–and training them to attack. Odessa is faced with a terrifying question: What if her necromancer’s magic is the weapon that brings Karthia to its knees?

Reign of the Fallen was one of my most anticipated releases of this year, and it did not disappoint at all. The world of Karthia was so unique and intriguing, and the cast of characters were diverse and tremendously lovable. More than anything, this story took me by surprise with how dark it was; I knew going into it that it involved necromancy, but I never expected how much it would focus on grief and healing.

If you asked me what the primary focus of this book is, I wouldn’t say it’s zombies, or necromancy – I would say that its primary focus is how to move on from the loss of a loved one, and how to find ourselves again after losing ourselves in our pain.

“What if our magic is the weapon that brings Karthia to its knees?”

→ Karthia & magic ←
The world of Karthia feels small, but well-developed. It has reached a standstill due to the King’s fear of change; his reluctance for progress has halted any forms of inventions or medical advancements, as well as refusing any heirs from taking the throne. Instead, King Wylding and his court reign eternal as the shrouded Dead.

The Dead need me far more than the living, and I, them. Without Dead to raise, I’d be nothing but an orphan. As long as the Dead are around, I’m their Sparrow.

Alongside the living and the Dead are those with magic, and I genuinely loved the setup of the magic system in the world of Karthia: individuals have inclinations for specific abilities based on their eye colors. Blue eyes lend to necromancy, while green eyes are for beast-masters, grey eyes indicate weather mages, and so on. Not every individual chooses to use their gifts, but those who do, train to become Masters and are regarded with the utmost respect.

→ Odessa, grief, & addiction ←
Our narrator, Odessa, is a necromancer bearing the title “Sparrow”, as she’s incredibly talented at finding her way home (which is not always an easy task in the ever-shifting Deadlands). Not only is she proficient, but she’s a delightful narrator: she’s strong, fierce, passionate, loving, and loyal – all of these, at times, to a fault. During the events of the book, Odessa loses someone very dear to her, and that’s where the depiction of grief comes in.

The sun still rises and sets, like it always has. It seems cruel that it wouldn’t stop, just for a little while, to show how much darker the world is without them in it.

I have read so many books about grief that I thought I’d seen every portrayal, good or bad, but Reign took me entirely by surprise. Odessa’s grief is written so genuinely, so authentically, that despite my personal ambivalent feelings for the character who passed away, I found myself mourning them for her. Her heartbreak oozes off the pages, and when she becomes addicted to the potions that numb her aches and offer her comforting hallucinations, you can’t help but understand why she’s using them as a coping mechanism. It’s the only way Odessa knows how to survive for quite some time, and because it feels so raw and is built up so thoroughly, her inevitable success in conquering her addiction made me want to jump up and cheer for her.

The sadness in his gaze when he looks at me – which the blue tonic never let me see – is just one more reason I’ll fight to never touch another drop.

One thing I would like to comment on is that I’ve seen other reviewers say they felt it was unnecessary to depict addiction in a YA novel or a fantasy story, and I’d like to offer another perspective on that. Substance abuse addiction is a very real issue that humans face everyday, in all walks of life and all parts of the world. It is tremendously misunderstood, and many people struggling with addictions are looked down upon, as though they have intentionally brought it upon themselves. Reign showcases a perfect example of how easy it can be to become addicted to a substance, especially in an instance like Odessa’s, when the tonics she craves are the only thing that can keep her from drowning in her grief and guilt.

I strongly believe one of the greatest things about books – and the YA community, as of late – is the opportunity to normalize subjects that are viewed as “taboo”, and by normalizing them, readers can learn how to empathize and to understand. Having watched my loved ones’ lives fall to pieces due to addictions, Odessa’s struggles resonated so soundly with me, and I am eternally grateful to Sarah for being willing to go there.

That’s what made me so well-suited for walking in the Deadlands, they said. My love of life.

→ friends & diversity ←
Besides Odessa, this story is absolutely filled to the brim with side characters, so lovable that they deserved their own sections:

• Odessa’s boyfriend, Evander, who frustrated me at times, early in the story, but is incredibly caring and a talented necromancer

• There’s Jax, who plays a bit of the “big jock” stereotype at times, but is a formidable ally and someone that Odessa never regrets having in her corner

• Kasmira, the beautiful ship captain whose preferred pasttimes seem to be trading illicit goods (like coffee beans) for gold and a bit of flirting (no lie, I shipped her and Odessa so hard at the beginning!)

• Valoria, the princess, is far brighter and more innovative than any “princess in the castle” stereotype you’ve ever seen

• Odessa’s adopted brother Simeon, and his partner Danial, are the precious cinnamon rolls of the story, and I loved them both to pieces and wanted so much more interaction with them

• Meredy, the clever, fiery beast-master, and her bonded companion, an intuitive grizzly bear named Lysander, with a personality as big as his body

I loved how diverse this cast of characters was. Sarah wrote a world in which racial tensions are nonexistent (on that note, Kasmira is black, and while I’m unsure of Odessa’s race, she describes her skin as being a dark brown in the beginning), and heteronormativity is never mentioned once – Odessa is bisexual (own-voice rep), Meredy and Kasmira are both attracted to women, and Simeon and Danial are gay. I loved how completely normalized and casual the representation was! As a queer woman, I live for normalized rep, especially in fantasy novels.

I only cry because their love is still with me, a familiar ache in my chest. I’ll carry it with me, always, something no one can ever erase.

→ final thoughts ←
I went into this book with a strong suspicion that I would love it, and I absolutely did. I think I was only a few chapters in the first time I predicted that I would be giving it 5 stars in the end, and here we are. I thought this was a phenomenal beginning to a series, and I cannot wait to see where Sarah takes Odessa in the next piece of the story. If you enjoy dark fantasy and authentic representation, plus a lot of necromancy and dead things, do not walk, run to pick up a copy of this incredible story.

Thank you to Samm for sending me an ARC of this book! My opinions were entirely my own. All quotes come from an unfinished ARC and may differ from the final product; also, some quotes have been slightly changed to remove names and spoilers. 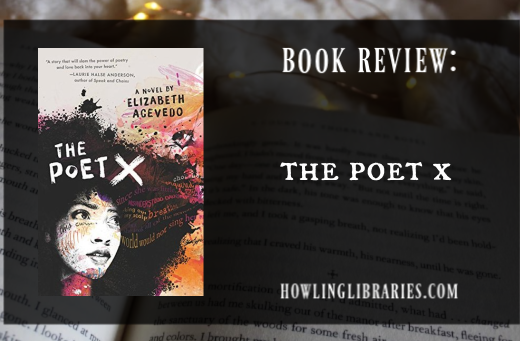 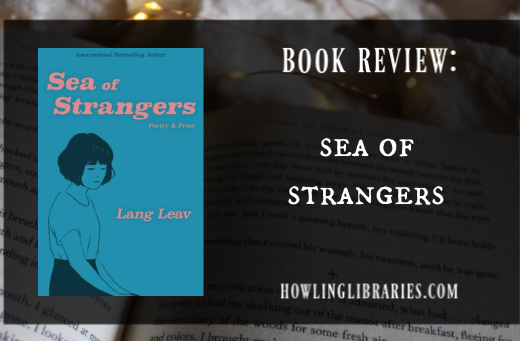