I asked you guys last week if you’d prefer to see this become a biweekly meme or for me to double post sometimes on Thursdays, and the results were overwhelmingly in favor of double posting so that this could remain a weekly meme!

Make sure you go give them some love, and feel free to join in with us on this meme!

I’m having a harder time finding books that I want to remove due to lack of interest, so some of these are being removed just because I have other books by those authors and want to read the ones I own first!

1. Since You’ve Been Gone — Morgan Matson
I have two of Matson’s other books, so I’ll read those, and if I enjoy them, I’ll add this one back!
2. Talon — Julie Kagawa
My “owned TBR” includes not one, not two, but SEVEN of Julie Kagawa’s books. This is not one of them, so… I’ll read those first. ?
3. Nemesis — Brendan Reichs
I thought this sounded cool when it came out, but the longer it’s been out, the more “meh” reviews I’ve seen from people I trust the opinions of, so I think I’ll pass.
4. Empress of a Thousand Skies — Rhoda Belleza
I think I tried to remove this in the early days of Down the TBR Hole, and was talked out of it, but I want to read it even less now than I did then, so…
5. Abigale Hall — Lauren A. Forry
This sounded interesting when I first added it, but wow, the average rating is super low, and even the positive reviews are saying it’s super repetitive, which is something that annoys me a lot in writing.

1. Heart of the Fae — Emma Hamm (purchased)
A bookstagram friend was raving about this series and showing off some fanart that looked so intriguing, and then I learned that the first book was only a few dollars on the kindle store, so I had to check it out!
2. Gates of Stone — Angus Macallan
Overall, I’m getting a little weary of YA fantasy about princesses and princes, but the synopsis of this sounds so cool (and murder-y!). Plus, check out that cover! ?
3. Dracul — Dacre Stoker, J. D. Barker
As soon as I heard that Bram Stoker’s great-grandnephew was the author of this, I was immediately intrigued. It’s a prequel to the classic Dracula, and is actually (in part) about Bram Stoker himself. I believe it’s inspired by his own notes that were found after his death.
4. What the Woods Keep — Katya de Becerra
I was hesitant to add this to my TBR at first because YA mysteries are hit and miss for me, but I keep hearing such good reviews, and I’m told it has some really unique, dark elements to it that I think I’ll like!
5. The Simple Wild — K. A. Tucker
I don’t read a ton of new adult romance, but I’m always looking for good recommendations in the genre, and tons of my favorite booktubers have been raving about this new release!

6. Descendant of the Crane — Joan He
First, I’m obsessed with this cover. Second, this Chinese-inspired fantasy story just sounds really lovely and I low key predict it’s going to be a hit when it comes out next year.
7. Children of the Dark — Jonathan Janz (purchased)
If you’ve somehow missed hearing me gush nonstop about Jonathan Janz’s recent release The Siren and the Specter, check my review out here. It was so good, I feel like I need to read his entire backlog immediately!
8. Sorcery of Thorns — Margaret Rogerson
This one doesn’t have a cover yet (I hear it’s going to be revealed soon!), but I adored An Enchantment of Ravens so much that I rushed to add this as soon as I realized it had been listed on Goodreads.
9. Evenfall — Gaja J. Kos, Boris Kos (ARC)
I won’t lie, the first thing about this that caught my eye was the stunning cover (I love Merwild’s art more than I can express), but several of my friends have been totally raving about it! I pre-ordered a finished copy, but while talking to the author on Instagram, she actually offered me an ARC, so I’m excited to get to this one soon.
10. Kin — Kealan Patrick Burke (purchased)
I always hear people raving about Kealan Patrick Burke’s horror stories, so I decided on a whim to add one to my Barnes & Noble order during the Labor Day sale, and I’m really looking forward to it! I hear it’s his most twisted and “extreme” work, and since I mostly lean more towards subtle and “gothic” horror, I think this should be really interesting!

What did you think of this week’s removals and additions? Will you be adding any of these to your TBR? 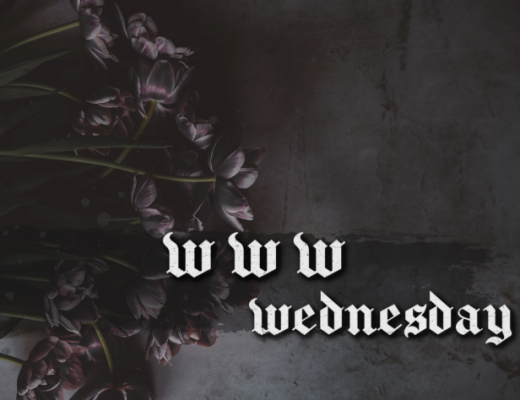 WWW Wednesday: did I meet my new reading goal yet?