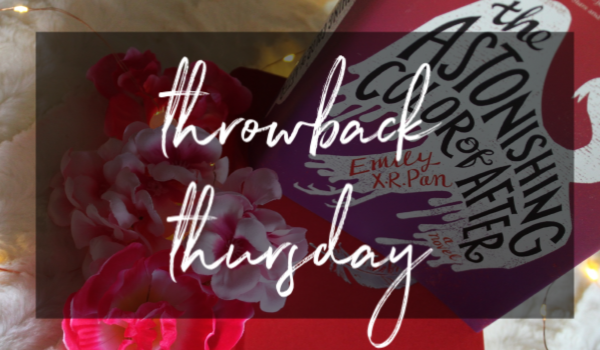 * This meme was started by Renee over at It’s Book Talk to give bloggers an opportunity to do a weekly throwback challenge! The idea is to highlight either an old favorite, or a book on your TBR that was published at least a year ago. Header image credit goes to Renee for this week’s post, since I decided to do this on a pretty short notice. *

First of all, how great is this cover edition?! It’s the 2016 paperback re-release, and I need it in my life now.

I decided to highlight It for this week’s Throwback Thursday post in honor of this being my first TBT tag post, and It being one of the first books I ever added to my Goodreads TBR shelf. In fact, this book is currently the book that’s been on that shelf the longest, having been added on December 29, 2012. Of course, It is much older, having first been published in 1986!

While I love horror books, here’s a fact that seems to always surprise people: I’ve never read a single S. King novel from start to finish. His attention to detail is something I struggled with a lot when I was younger, and now that I’m older, to be frank, I just haven’t picked any of his books up in a few years! I lucked up at a few garage sales several years ago and managed to accrue roughly 30 of his books for $1 each or less – It being one of those, of course – so I have shelf upon shelf full of his work, all of them sitting idly untouched. It’s actually a little bit sad.

My goal for this year is to read at least two King books before December 31st! I started out the year with the goal of reading five or more of them, but then life happened, and I got back into the high fantasy genre, and I met BookOutlet… you guys get me, right? So, now that goal is two, from start to finish; no skimming, no cheating! Since the movie is being remade, I think I’ll make this one of those. In fact, I’m planning to devote the entire month of October to horror TBR picks, so that sounds like the perfect time to tackle this!

Oh, and if you’re one of the, I dunno,  eight people on this planet who haven’t heard of this book or its movie adaptation… here’s the synopsis for ya, courtesy of Goodreads:

Stephen King’s #1 national bestseller about seven adults who return to their hometown to confront a nightmare they had first stumbled on as teenagers…an evil without a name: It.

Welcome to Derry, Maine. It’s a small city, a place as hauntingly familiar as your own hometown. Only in Derry the haunting is real.

They were seven teenagers when they first stumbled upon the horror. Now they are grown-up men and women who have gone out into the big world to gain success and happiness. But the promise they made twenty-eight years ago calls them reunite in the same place where, as teenagers, they battled an evil creature that preyed on the city’s children. Now, children are being murdered again and their repressed memories of that terrifying summer return as they prepare to once again battle the monster lurking in Derry’s sewers.

Book Beginnings: The Art of Starving