SYNOPSIS: Eric disappeared when he was three years old. Ben looked away for only a second at the grocery store, but that was all it took. His brother was gone. Vanished right into the sticky air of the Florida Panhandle.

They say you’ve got only a couple days to find a missing person. Forty-eight hours to conduct searches, knock on doors, and talk to witnesses. Two days to tear the world apart if there’s any chance of putting yours back together. That’s your window.

That window closed five years ago, leaving Ben’s life in ruins. He still looks for his brother. Still searches, while his stepmother sits and waits and whispers for Eric, refusing to leave the house that Ben’s father can no longer afford. Now twenty and desperate for work, Ben takes a night stock job at the only place that will have him: the store that blinked Eric out of existence.

Ben can feel that there’s something wrong there. With the people. With his boss. With the graffitied baler that shudders and moans and beckons. There’s something wrong with the air itself. He knows he’s in the right place now. That the store has much to tell him. So he keeps searching. Keeps looking for his baby brother, while missing the most important message of all.

That he should have stopped looking.

As a long-time browser of r/NoSleep and fan of Dathan’s work, when I learned that Bad Man was being released, I was so excited. To learn that he was coming out with his first ever full-length novel—and his first new work in way too long—had me rushing to request this one, and I was beyond excited when I was approved for an ARC. That said, the end result left me with some very mixed thoughts about the execution of this story.

He’s not coming home. It was the only echo that seemed to get louder over time, and Ben couldn’t deny that it had changed him, worn him down. 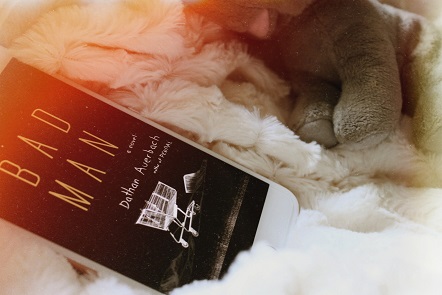 First, let me say that if you find yourself particularly susceptible to stories about child abduction, proceed with caution on this one. As a mother to a two-year-old, I rarely pick up books about kidnappings because they tend to wreak havoc on my emotional wellbeing, but since it was Dathan writing this one, I decided to give it a chance. While I never felt like I needed to DNF it, there were a few times where I had to put down my e-reader and do something else for a while, and I definitely shed a few tears (and cuddled my kiddo a lot in between chapters). The best execution of the entire storyline is the grief, and it is just written out so flawlessly that you can’t help but feel your heart break right alongside Ben’s.

The sound was what Ben noticed the most. There was so much less to hear now, but Ben still listened.

The rest of the book’s various facets left me feeling ambivalent, frankly. It seemed as though every individual aspect to the storytelling just took things a little too far: the atmosphere was magnificently immersive until it became too repetitive, the red herrings were a whirlwind until they became too unreliable, and the unreliability of Ben’s narrative was a tremendous source of suspense until it began to feel like plot holes. More than anything, the slow burn of the story’s buildup was perfect for creating a nauseating sense of dread, until it reached a length at which I found myself simply ready for it to hurry up and end. Each of these complaints boil down to one thing: if this book had been 50-100 pages shorter, I bet it would have been a perfect 5-star read for me.

Every person has a day that transforms trust into a choice, when he learns that people lie for reasons all their own.

All of that aside, it was obviously still an enjoyable read; that 3-star rating is more of a 3.5, and there were a lot of lesser aspects that I thought were great touches of detail. Ben is disabled and overweight, and while there is a bit of fat-shaming and ableism in regards to both of these things, I enjoyed the complexity it lent to his overall struggles and the back story he eventually came around to giving, explaining how he received his injury, and what that lack of mobility did to the rest of his daily life experiences.

I’ll never leave you, Ben’s heart sobbed. Tell him. Tell him that I’ll stay with him forever. Even if that means neither of us can never ever leave, I’ll stay.

Was Bad Man a perfect read? No. It’s lengthy, it misses opportunities left and right, and to be totally fair, the ending left me with a sense of dissatisfaction that I haven’t been able to shake in the days since I finished reading it. Regardless, Dathan has a knack for plot lines and creepy settings, and my slightly lackluster response to this story will absolutely not slow me down when it comes time to reach for his next release, whenever that may be.

All quotes come from an advance copy and may not match the final release. Thank you so much to Doubleday Books for providing me with this ARC in exchange for an honest review!

Swordheart by T. Kingfisher
Visit my shelf on Goodreads!

I’m gonna talk about something that I’m not supposed to talk about.

I was dirt poor for most of my adult life, and worked jobs that didn’t offer dental care (hospitality/serving). Small problems like cavities became BIG problems.

What's a good male acting performance where he isn't yelling

I still haven't read anything by Sanderson, but this post makes me glad that I didn't remove him from my TBR when *several* people over the past few years lectured me for buying his books as a queer person.

if anyone didn’t want to go on reddit, here is the post as well as Brandon Sanderson’s comments on his previous homophobic statements as well as an apology. He plans to put out a blog post consolidating his thoughts as well.