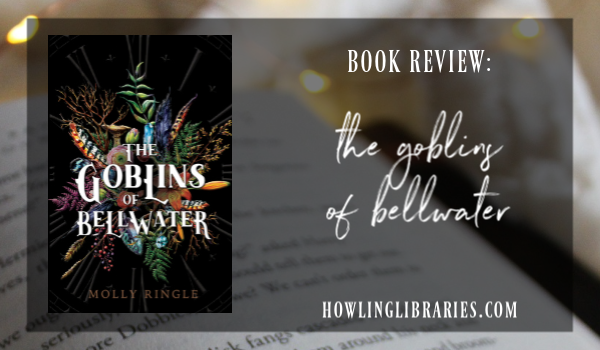 Most people have no idea goblins live in the woods around the small town of Bellwater, Washington. But some are about to find out. Skye falls victim to a goblin curse in the forest one winter night, rendering her depressed and silenced. Her older sister, Livy, is at wit’s end trying to understand what’s wrong with her. Local mechanic Kit would know, but he doesn’t talk of such things: he’s the human liaison for the goblin tribe, a job he keeps secret and never wanted, thrust on him by an ancient family contract.

Unaware of what’s happened to Skye, Kit starts dating Livy. Meanwhile, unbeknownst to Kit, Skye draws his cousin Grady into the spell through an enchanted kiss in the woods, dooming Grady and Skye both to become goblins and disappear from humankind forever. Livy, the only one untainted by a spell, sets out to save them on a dangerous magical path of her own.

That was what she hated most about this spell, sometimes. The goblins had taken her love of the forest and tainted it, bound it up with their magic.

Goblins starts off so strong; the goblins right from the beginning are reminiscent of actual folklore, being creepy, horrible little critters. They’re greedy, grotesque, carnal, and violent. Reading their treatment of Skye is downright painful, as every move they make is laced with cruelty. Unfortunately, though, the book goes downhill fairly quickly beyond that point, and by the end, I think I was just ready for it to be over as quickly as possible.

“That’s why the locals called them weeds.” Livy sounded glum. “They actually are an invasive species.”

This book is so incredibly atmospheric. The settings are described so beautifully that you find yourself feeling as though you actually are in a damp, dark forest at night, surrounded by mushrooms and critters. I’ve never even visited the PNW, yet even the daytime scenes had me feeling as though I could blink and find myself transported into a beautiful, wet, misty land of greenery and coziness. Not to mention, the descriptions of the goblins themselves are so creepy and perturbing!

Mental illness is handled beautifully in this book; Skye’s silence is mistaken for a deep depression, and her sister is so loving and concerned. The Sylvain boys, despite hardly knowing Skye before the events of the story, are nothing but understanding and caring – especially Grady, which leads me to my next point.

This story has hardcore insta-lust, and I would say, even insta-love, but it’s actually for a reason. The curse placed upon Skye has made it so whomever she chooses as her mate must want her back, so you’re never left thinking, “How do two grown adults fall for each other so quickly?” The two of them even frequently consider the aspect that it’s abnormal for them to be so attached. Oh, and did I mention that the men are younger than the woman in both ‘ships? Yeah, that happens, and I never see that, so I couldn’t help but love it.

The writing is quick and easy, but things are just too convenient and predictable, especially towards the end of the book. There is one small twist, and while it’s a fun one, I definitely didn’t find it even remotely surprising (you kind of guess it right at the beginning). Speaking of odd writing, there are a lot of mentions to sex, and most of them feel unnatural and a little bit forced. The discussions and scenes don’t often feel natural to the story. (Speaking of the sex, if you’re turned off by the fact that many reviewers are calling this book erotica, I wouldn’t be too concerned – everything is only implied or done in a “fade to black” style.) EDIT: I’ve been informed that many people received an ARC that was much more explicit than mine was, for some reason? So YMMV.

Mostly, the ending was just such a disappointment; while the rest of the book hadn’t been remarkable, I’d have given it 4 stars for fun’s sake, but the ending is so rushed and predictable that it immediately lowered my rating to 3. I felt like there was this obvious desperation to tie up all of the loose ends, while so much of the book had been spent on descriptions of unimportant aspects, such as Grady’s cooking, or Kit’s frustrations over how nobody believed in the goblins’ existence.

All in all, The Goblins of Bellwater is a quick, fun read, and given the fact that you can nab an ebook of it on the Kindle store for $3 or less right now, if you’re interested in a new adult romance with fantasy and lore thrown in, I’d tell you to go for it. That said, I wouldn’t expect anything overly intense or captivating.

All quotes are taken from an unfinished review copy and may differ from the final release. Thank you so much to NetGalley and Central Avenue Publishing for granting me this ARC in exchange for an honest review!