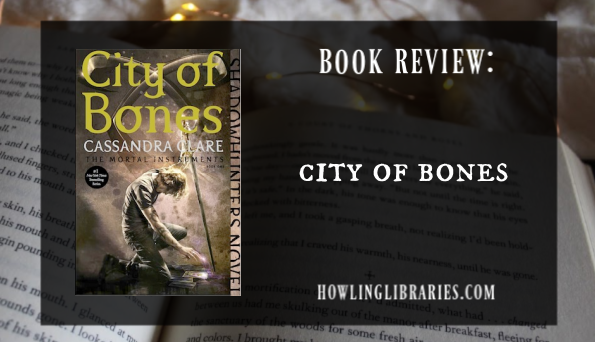 TITLE: City of Bones
AUTHOR: Cassandra Clare
SERIES: The Mortal Instruments, #1
RELEASED: March 27th, 2007; Margaret K. McElderry Books
GENRE: Fantasy
AGE RANGE: YA
SYNOPSIS: When fifteen-year-old Clary Fray heads out to the Pandemonium Club in New York City, she hardly expects to witness a murder― much less a murder committed by three teenagers covered with strange tattoos and brandishing bizarre weapons. Then the body disappears into thin air. It’s hard to call the police when the murderers are invisible to everyone else and when there is nothing―not even a smear of blood―to show that a boy has died. Or was he a boy?
This is Clary’s first meeting with the Shadowhunters, warriors dedicated to ridding the earth of demons. It’s also her first encounter with Jace, a Shadowhunter who looks a little like an angel and acts a lot like a jerk. Within twenty-four hours Clary is pulled into Jace’s world with a vengeance, when her mother disappears and Clary herself is attacked by a demon. But why would demons be interested in ordinary mundanes like Clary and her mother? And how did Clary suddenly get the Sight? The Shadowhunters would like to know…
Exotic and gritty, exhilarating and utterly gripping, Cassandra Clare’s ferociously entertaining fantasy takes readers on a wild ride that they will never want to end.

I know I’m slow to pick up this series, but I honestly spent several years of my life thinking that Cassandra Clare’s books didn’t hold anything special in store for me. They just didn’t strike me as books that I would like very much, but when my friend Julie started binge reading them last fall, I decided to finally give them a chance, and I am so happy that I did!

“It means ‘Shadowhunters: Looking Better in Black Than the Widows of our Enemies Since 1234’.”

→ Clarissa Fray ←
Clary, our narrator, was a little more trope-y and cliché than I’ve grown comfortable with in YA, but for a mid-2000s release, her character isn’t wholly unlikable or offensive. She falls victim to the “not like other girls” stereotype a few times, and she’s aggressive when interacting with… well, almost everyone… but she’s also caring, artistic, and bright. She struck me immediately as the sort of protagonist that, while I felt ambivalent towards by the end of the first installment, I could certainly grow to love throughout the series.

“Sorry, are you telling me that your demon-slaying buddies need to be driven to their next assignment with the forces of darkness by my mom?”

→ Simon Lewis ←
If Clary falls prey to tropes and clichés a bit, Simon does, tenfold. He’s the epitome of the “jealous best friend” trope from the start, and was honestly the only thing about this book that I fully disliked. A little of his banter with Clary was cute, but for the most part, his scenes felt whiny and boring – much like his character, as a whole, felt to me.

“The meek may inherit the earth, but at the moment it belongs to the conceited. Like me.”

→ Jace Wayland ←
Jace, on the other hand, hooked me from the beginning. I’m such a sucker for the conceited, arrogant teddy bear love interest, and he fulfilled that to every extent. His sarcasm and ridiculous remarks had me laughing out loud more than a few times, but he’s also the sort of character who you immediately can find this gooey, tender core in, and you just know he’s going to make your teeth ache sooner or later (and he totally does). I lived for Clary’s adventures with him. Even if I hadn’t enjoyed the rest of the characters and the plot, I feel like I’d have kept reading this series just for how damn cute he is.

“Where there is love, there is often also hate. They can exist side by side.”

→ Isabelle & Alec Lightwood ←
Full disclosure: I went into this series expecting to love these siblings just because I’ve heard so much raving about them (*coughJulie!cough*), but they really are precious. I mean, Alec spends most of the first book being kind of a jerk, but he has his motives, and they’re worth pitying. Isabelle comes off as the “airheaded hot girl” cliché to begin with, but it’s immediately evident that she’s a skilled warrior, kind, and entertaining (even if she’s a terrible cook). I don’t feel like I got to know either of the Lightwood kids very well in this installment, but I definitely felt like their characters were set up well enough to make me excited to spend more time with them in the future.

Beautiful. He’d called her beautiful. Nobody had ever called her that before, except her mother, which didn’t count. Mothers were required to think you were beautiful.

→ hunting, fighting, twists, and turns ←
I was left impressed by how well Cassandra mixed world-building, character development, and action scenes in this book, but one of my few complaints was that I didn’t particularly enjoy any of the fight scenes. I know a lot of authors say they’re difficult to write, so I won’t hold it against her (especially in her debut!), but the battles were a little hard to visualize and actually had quite a few inconsistencies (such as a character being annoyed by a lack of pockets to hide something in, but on the next page, hiding said item in her previously nonexistent pocket).

What the book lacked in fights, though, it made up for with world building and twists – most of which I, admittedly, was able to peg before it came to pass, but I didn’t think they felt so obvious that it bothered my reading experience.

“The boy never cried again, and he never forgot what he’d learned: that to love is to destroy, and that to be loved is to be the one destroyed.”

→ final thoughts ←
City of Bones might not have been perfect, and it might have held true to some of the mid-2000s writing clichés I expected, but I was so pleasantly surprised by how much this story sucked me in, and how quickly I became invested in these characters’ lives and the outcomes of their struggles. More than anything, I was stunned by how quickly I fell in love with Jace and the Lightwood siblings, as well as some of the lesser-seen side characters, like the magnificent Magnus Bane and the kindly, brave Luke Garroway. I’m so glad that I’ve already got the entire TMI series waiting on my shelf, and I miiight have already ordered the TDI trilogy, if that tells you anything about how excited I am to continue this story!