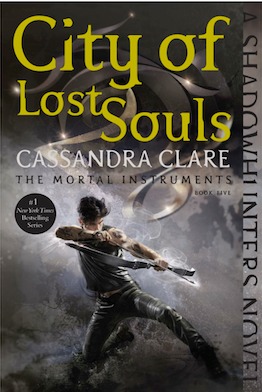 SYNOPSIS: When Jace and Clary meet again, Clary is horrified to discover that the demon Lilith’s magic has bound her beloved Jace together with her evil brother Sebastian, and that Jace has become a servant of evil. The Clave is out to destroy Sebastian, but there is no way to harm one boy without destroying the other. As Alec, Magnus, Simon, and Isabelle wheedle and bargain with Seelies, demons, and the merciless Iron Sisters to try to save Jace, Clary plays a dangerous game of her own. The price of losing is not just her own life, but Jace’s soul. She’s willing to do anything for Jace, but can she still trust him? Or is he truly lost?

I’ve loved this series since the first book, but what really stood out to me in this fifth book is how much darker the tone suddenly got. It’s not just the events that happened in the book, but the world itself feels much bleaker and there’s a slow-building sense of dread, which makes sense, as our little team begins to prepare themselves for a war unlike anything they’ve seen so far.

“There are some people — people the universe seems to have singled out for special destinies. Special favors and special torments. God knows we’re all drawn toward what’s beautiful and broken; I have been, but some people cannot be fixed. Or if they can be, it’s only by love and sacrifice so great it destroys the giver.”

Even among characters who usually take on every scenario with a smile, there’s this anxiety building up, this urgent tension that bleeds right off the pages. If nothing else, it‘s a terrific example of how far Cassandra Clare’s writing has progressed. Everything is more authentic and three-dimensional, the stakes are getting higher with each misstep and twist, and it’s just… fantastic. I think this may have been my favorite book in the series so far, and I could barely stand to put it down.

It wouldn’t be a Shadowhunters book without some absolutely adorable character moments, banter for days, and loads of development in personalities, though. Simon and Izzy, both having been characters I did not like at all in the first two books, had me 100% in love with both of them by this end of this one. Simon has come into his own so well as the Daylighter—as this protective, self-sacrificing, noble little hero—and Izzy is so tough, such a rock for her loved ones. There’s a scene where Izzy is described as “a mother cub defending her young”, and that perfectly sums up how I view her relationship with her loved ones.

“Speaking of hope, did you see that shot Alec got off with his bow? That’s my boyfriend.”

Of course, I can’t review this one without discussing Alec and Magnus. Some of the incidents between these two—especially involving Alec—broke my heart over and over. I know it’s hard to be in Alec’s position, but Magnus is forevermore my sweet little bisexual warlock baby, and I wanted to climb into the book and slap the shit out of Alec a few times. Either way, I think this was the most time we’ve gotten to spend with Magnus in any book in the series so far, and I was here for it, okay?

“I don’t care. He’d do it for me. Tell me he wouldn’t. If I were missing—”
“He’d burn the whole world down till he could dig you out of the ashes.”

Finally… Clary and Jace. Where do I even begin? My heart hurts for them. Everything in the world has conspired against their happiness, yet still they fight for each other, and it’s so precious. Before I started this series, if you had told me they would become one of my all-time favorite OTPs, I would have laughed in disbelief, but here we are. I love the romances that Cassandra Clare builds, and the agonizingly slow, angsty progression between Clary and Jace has to be my favorite.

She turned and looked at him. “Ducks?”
A smile tugged the edge of his mouth. “I hate ducks. Don’t know why. I just always have.”

Jace has grown so much from his self-obsessed little asshole self (though let’s be real, I loved him then, too), and Clary has become this powerhouse of a character. It describes her perfectly when the other Shadowhunters say that Clary essentially charges into any given situation, regardless of risk, and finds a way to fight through it. She never lets anyone tell her “no”, and she always mucks things up a bit along the way, but she always makes it right by the end. She’s a tremendously unlikely heroine, and I love her for it.

The last thing I wanted to touch on is Sebastian, and his entire arc as a villain. Based on the actions of Valentine in the first few books, I suppose I expected Sebastian to feel predictable-but-fun in the same way, but honestly, he’s so much more complex and mentally broken than his father was. While I can appreciate the writing of his character, I can’t fathom why so many people seem to root for him; but either way, one thing I’m sure of is that I positively dread seeing what he comes up with next.

Content warnings for attempted rape, homophobia, and slut-shaming (all challenged).