Winter it’s coming… it’s already here, and with it comes a horror no door can keep out. It’s there in the yard, in the faces of the snowmen a young boy doesn’t remember building. It’s in the oddly empty streets below Santa Claus’s crumbling sleigh. It’s in the unnatural movement of the snow that suffocates a widower’s town, and in the cold eyes of a lonely man’s estranged children.

Here, there is no holiday cheer, only spine-chilling fear, in the DEAD OF WINTER. 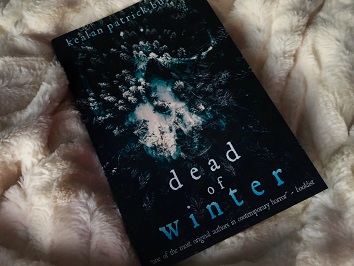 I know that I always rave about Kealan’s writing, so I’m sure it will come as no surprise to any of you that I adored every single page of this collection of wintry short stories, but let me go ahead and make this clear: this is the most flawlesswriting of Kealan’s I’ve read thus far, and easily my favorite. I know beyond the shadow of any doubt that I will be picking this one up over and over again for rereading in the future, whether it’s in the dead of winter (ha, ha) or any other season.

The boy stood in his bedroom, the cold licking his wrists and ankles. He shuddered. His bed stood only a few tantalizing feet away. The window was even closer.
But he couldn’t move. Not yet.

This collection is so freaking atmospheric, and I honestly 5-starred every single story. I normally put together a list of favorites for short story collections, but that list would just be all of them in this case. You’ve got these terrible, dark stories like ‘Black Static’ and ‘Visitation Rights’, quiet and slow-moving tragedies like ‘The Quiet’ and ‘They Know’, or tales that are simply terrifying, like ‘Snowmen’. They’re literally all incredible and you can’t afford to skip a single one!

The house is always cold. It didn’t use to be, but then we used to have a son to warm it.
It’s been cold since I killed him.

If you haven’t read anything by Kealan yet, I don’t know what the hell you’re waiting for, but you should definitely do it as soon as humanly possible, because I promise you’re missing out on something incredible. I highly recommend Dead of Winter regardless of what season you’re in when you’ve found this review, but especially if you’re looking for something to make the chilling bleakness outside just a little more threatening.