TITLE: Emergency Contact
AUTHOR: Mary H.K. Choi
RELEASED: March 27th, 2018; Simon & Schuster Books for Young Readers
GENRE: Contemporary
AGE RANGE: YA/NA
SYNOPSIS: For Penny Lee high school was a total nonevent. Her friends were okay, her grades were fine, and while she somehow managed to land a boyfriend, he doesn’t actually know anything about her. When Penny heads to college in Austin, Texas, to learn how to become a writer, it’s seventy-nine miles and a zillion light years away from everything she can’t wait to leave behind.
Sam’s stuck. Literally, figuratively, emotionally, financially. He works at a café and sleeps there too, on a mattress on the floor of an empty storage room upstairs. He knows that this is the god-awful chapter of his life that will serve as inspiration for when he’s a famous movie director but right this second the seventeen bucks in his checking account and his dying laptop are really testing him.
When Sam and Penny cross paths it’s less meet-cute and more a collision of unbearable awkwardness. Still, they swap numbers and stay in touch—via text—and soon become digitally inseparable, sharing their deepest anxieties and secret dreams without the humiliating weirdness of having to see each other.

This was one of my most anticipated contemporary releases of the year, and while it definitely was not without its flaws, I thought it was all in all a tremendously cute, sweet story. I get so accustomed to reading heavy contemporaries—and don’t get me wrong, this one tackles some really rough topics—but Mary managed to write it in a way that, at risk of sounding really odd by saying this, felt like a geeky, goth twist on the stereotypical “fluffy YA contemporary” novel. 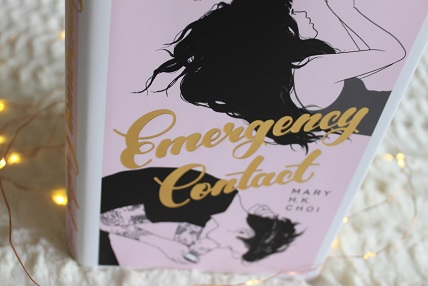 → Penelope Lee ←
The book alternates perspectives, and the first character we meet—the one who feels more like the primary protagonist—is Penelope Lee, or Penny, a Korean-American girl who’s beginning her first year at college. She’s not a particularly likeable character for the first half or so of the book: her anxiety is relatable and I saw a lot of myself in the ways it manifests for her, but she’s also a bit coldhearted and downright mean to the other women in her life. I always struggle with books that feature girl-on-girl hate because it’s hard to predict if it’s a poor trope or the beginning of a great character progression, but thankfully, it’s the latter in this case. Penny is kind of weird and hilarious, and I absolutely would have been best friends with her as a teen (and by that I mean we would’ve just blown each other’s phones up with awkward questions and stupid, geeky jokes).

People were odd. Sam loved and loathed that about them. Fiction was fine, but real life was the true freak show.

→ Sam Becker ←
Sam, our other protagonist, is a 21-year-old who runs the local coffee shop (and lives above it), and he’s kind of the definition of the “starving artist” trope, but in a good way. There’s a lot of validity in his narrative when it comes to his representation of what being poor is like for kids, and that’s not a side of the story that we see often in YA books. That said, he’s a good egg through and through, even if I just spent most of the book feeling sorry for him and simultaneously kind of wanting someone to shake a little bit of sense into him. It’s hard not to root for him, but I do wish that we’d gotten to see a little bit more of his inner monologue regarding his friendship/relationship with Penny, instead of spending so much time focusing on his ex-girlfriend or his past.

That said, watching these two interact with each other is the best part of the book, by far; their text conversations cracked me up, and their flirting is so awkward and nerdy at times that it reminded me WAY too much of myself and my fiancé. They’re also just so candid and open with one another, and it’s absolutely precious to watch how instantly they trust one another. It doesn’t feel like insta-love by any stretch, but it does portray how blissfully disarming it can feel to meet someone you immediately feel like you can be yourself around.

Don’t get me wrong, though, there are some very heavy topics in this book, and between that and the characters’ ages, I actually hesitate to call this YA, as it felt more like a “mild” NA read to me. We see multiple instances of abusive and/or neglectful parenting, plus we watch Sam deal with life as a recovering alcoholic (and he does relapse at one point, so if that’s a trigger for you, beware). We also watch Sam deal with his ex-girlfriend’s pregnancy and there’s a lot of chatter about becoming a parent and what that entails. At one point, a character accidentally overdoes it with drugs and ends up hospitalized. A character explains a rape from her past in fairly heavy details, and there are a handful of racist comments thrown at Penny throughout the story. As far as the dialogue itself goes, there are some unchallenged remarks that I could’ve done without, such as one slightly acephobic comment, and several uses of the word “slut”.

Altogether, Emergency Contact isn’t a perfect read; it’s got some awkward comments and uncomfortable moments, and to be frank, the first quarter or so of the book is slow and a little bit boring. That said, it really picked up for me and I absolutely loved the second half. By the end of the story, I was rooting so hard for Penny and Sam to just be happy and healthy and have a beautiful little life together. ♥ If you enjoy YA/NA contemporaries, especially ones with a bit of geek humor and cute boys with lots of tattoos, definitely pick this one up and give it a try.