Thank you so much to my horror twin, Heather, for tagging me in this! The original creator of this tag is @the.book.gypsy on Instagram.

1. What book gave you the creeps?

Definitely Slasher Girls & Monster Boys, a YA horror collection edited by April Genevieve Tucholke. Some of the stories are just okay, but there are a few surprisingly creepy ones, including my favorite: ‘In the Forest Dark and Deep’, by Carrie Ryan. It’s an Alice retelling that involves a super creepy, bloody white rabbit that watches the main character from the woods and kills children. I actually still get a little creeped out when I think back to it!

2. What book gives you the best Halloween vibes?

Thirteen Chairs by Dave Shelton. It makes me sad that this MG/YA anthology isn’t more popular, because it’s really fun! A boy goes into a haunted, abandoned house, and finds a circle of people around a table, sharing ghost stories. It feels very Halloween-y to me.

I actually haven’t read a good vampire book in years, so I can’t say that I have a favorite one, but there are two at the top of my TBR that I expect I will absolutely love: Certain Dark Things by Silvia Morena-Garcia, which is a diverse vampire story set in Mexico City, and NOS4A2 by Joe Hill, which is a very twisted Nosferatu retelling.

4. What book scared you so much you had to sleep with the light on?

I don’t get legitimately scared by books often at all, but the last one I remember genuinely frightening me was Heart-Shaped Box by Joe Hill. It’s one of Joe’s early works, and features an aging, washed-up rock star who purchases the suit of a dead man, only to learn that the dead man was his ex-girlfriend’s father, and his ghost is still lingering, hell-bent on revenge. The ghost is vicious, does some serious damage, and terrifying.

5. What’s your favorite book about witches/goblings/ghosts/demons?

Witches: I’d like to recommend a graphic novel I don’t hear people talk about much: Wytches by Scott Snyder. The witches in this story are absolutely TERRIFYING, and this is the only graphic novel that I’ve ever been forced to read in the daylight because the art was too creepy for nighttime reading!

Goblins: I actually only remember reading one book about goblins in recent years, and that was The Goblins of Bellwater, which, while I didn’t give a rave review, I absolutely LOVED the way the goblins in it were portrayed and would recommend it based just on that fact.

Ghosts: I love ghost stories, so this was a tough one to narrow down, but a recent favorite was The Atrocities by Jeremy C. Shipp, a novella about a woman who goes to be the nanny of a little girl, only to learn the child is a ghost.

Demons: At risk of getting annoying by mentioning so many Joe Hill titles, the Locke & Key graphic novel series. The villain in the book is a demon of sorts, and it’s super creepy and twisted, just like the whole storyline is. It’s also super character-driven, with this trio of siblings that you can’t help but love.

6. What book do you wish was scarier than it was?

House of Ash by Hope Cook, which is a YA horror ARC I read last year and was sadly really disappointed by. It sounded like it could be really spooky, and I love that it alternates between current day and historical fiction, but it ended up being more about this weird insta-love romance than anything actually scary.

7. What’s your favorite book that takes place in October?

I don’t tend to remember what time of year a book takes place in unless it’s super related to the story, but I think There’s Someone Inside Your House takes place in October. I know it’s more of a thriller/slasher than horror, and it’s really more of a romance than anything, so it’s not something I’d recommend for a spooky read, but I thought it was really cute and fun, and the characters were lovable.

Since this is a July-specific tag and the month is almost over, I’m not going to tag anyone specific, but anyone who wants to do it totally should! ? 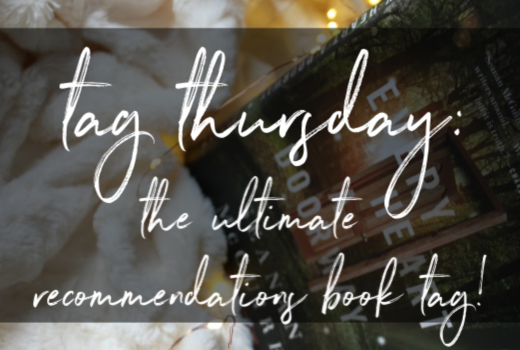 The "I Love Spring!" Book Tag