TITLE: Heart of Iron
AUTHOR: Ashley Poston
RELEASES: February 27th, 2018; Balzer + Bray
GENRE: Sci-fi
AGE RANGE: YA
SYNOPSIS: Seventeen-year-old Ana is a scoundrel by nurture and an outlaw by nature. Found as a child drifting through space with a sentient android called D09, Ana was saved by a fearsome space captain and the grizzled crew she now calls family. But D09—one of the last remaining illegal Metals—has been glitching, and Ana will stop at nothing to find a way to fix him.
Ana’s desperate effort to save D09 leads her on a quest to steal the coordinates to a lost ship that could offer all the answers. But at the last moment, a spoiled Ironblood boy beats Ana to her prize. He has his own reasons for taking the coordinates, and he doesn’t care what he’ll sacrifice to keep them.
When everything goes wrong, she and the Ironblood end up as fugitives on the run. Now their entire kingdom is after them—and the coordinates—and not everyone wants them captured alive.
What they find in a lost corner of the universe will change all their lives—and unearth dangerous secrets. But when a darkness from Ana’s past returns, she must face an impossible choice: does she protect a kingdom that wants her dead or save the Metal boy she loves?

When I heard this retelling of Anastasia was releasing, it immediately piqued my interest – even more so, once I heard there was a human/robot love story, because, uh, what?! – so I was incredibly excited to check this one out. There are some fun, unique ideas at play here (which is crucial for a retelling!), but unfortunately, there’s also quite a bit to unpack. I found myself trudging through this book and almost DNFed it several times, but I ultimately decided to finish it so that I could review it properly.

“To those who set sail into the night, may the stars keep them steady…”
“And the iron keep them safe.” 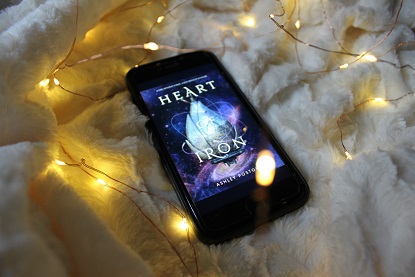 → world-building & story-telling ←
What could’ve been this book’s greatest strength ended up being its biggest flaw: while the writing itself isn’t bad, it feels inexperienced, and the world-building leaves a lot to be desired. There are so many fantastically cool ideas thrown into play, such as a character who can see a person’s fate if he touches them – but we’re constantly left wondering why his people used to see fates, why they can no longer use their powers, why he is the last of them, and so on. We’re given a thread, with nowhere to follow it to.

It was more than a promise – it was an oath. Unbreakable. Strong like iron and steady like stars.

Likewise, there’s a running theme throughout the book in which people swear “on iron and stars”, and this is described as some sort of unbreakable vow, but we never learn why it is so important, what magic surrounds this particular phrase to enforce it, or what would happen to a person who broke their vow. Despite it being such an important notion, it is tossed around constantly and very quickly loses any form of impact.

Finally, my two biggest complaints about the writing:

No. He did not want. Could not want. But he did. He wanted so badly to exist a little longer beside her.

→ Ana & Di ←
Two of our main characters are the infamous human/robot duo I mentioned: Ana, the human girl, and D09 or Di, the robot. I know the entire idea of this coupling feels really gross to a lot of people I’ve spoken to about this book, and I can see why, but for me, personally, it was the most interesting aspect of the story. From the start, Di is capable of more sentient thought and emotion than any of the other Metals (robots) in their world, and he only grows more and more human-like as the story progresses. My favorite part of the entire story, by far, was watching him learn how to cope with human emotions and desires.

(Side note here: he also has a sidekick in the form of a little bot named EOS, who Di affectionately calls his can opener, and this little bot is somehow the best part of the entire book. He’s precious.)

Her heart beat, and his wires hummed, and they were Ana and Di – and there were no words for that.

Ana, on the other hand, is a far less interesting narrator. It’s not that she’s bad, problematic, offensive, or unlikeable… she’s just boring. There’s nothing complex to her and she is never really fleshed out. She’s self-contradicting – especially in the ending, to an infuriating degree – and never feels like a narrator. Despite it being her story, she never held the spotlight.

→ Robb ←
When it comes to the main narrators and their respective levels of interesting, complex personalities, Robb is, sadly, not far above Ana on my list. Again, there’s nothing to dislike about him, but there’s nothing to like, either. He has the potential for an incredibly sad, intriguing back story with his search for his missing/presumed dead father, and his over-bearing and abusive mother, or even his terrifying big brother… but it felt like we were only ever allowed to skim the surface of any of these intriguing things. Robb’s character is the main aspect that makes me think, had this book been limited to one, or even two narrators, it would’ve been so much better, because with the constant switching, we just didn’t really get to know anyone very well.

All fates in the universe connected in a river, and that river flowed only one way.

→ Jax ←
Finally, what seems to be the fan favorite of the narrators: Jax, the Solani pilot with stars in his veins. Jax was a major redeeming quality in this book for me, until we reached a point where we got to spend very little time with him, and the time we did get to spend with him was mostly used up on repetitive mooning over another character. While the romance Jax finds himself in is cute, it’s also fairly insta-lovey, which put a damper on the entire couple for me. That said, Jax is a really fun and enjoyable character, and if I had to pick any one character who I would’ve liked to have read this entire story through the singular perspective of, it would be a toss-up between D09/Di and this guy.

“I’ll always come back for you,” she whispered, reaching up on her tiptoes to press her forehead against his cool metal one. “I promise you on iron and stars.”

→ diversity ←
There is one positive note that I can’t finish this review without touching on, and that’s the diverse cast of characters we get to meet throughout the story. Not only is there a main gay couple, there’s also a lesbian side couple (and they are fantastic – could we please have seen more of them?!). Multiple characters are described as being people of color, and there’s even some disability rep! All of my issues with the story itself pushed aside, I genuinely appreciate how normalized Ashley Poston made all of these diverse characters feel in the context of their world.

“Because I will follow you anywhere,” he insisted. “To the ends of the galaxy, if I have to. I want to exist where you exist, and that is enough.”

→ final thoughts ←
At the end of the day, I really wanted to enjoy this book, but I had to look at it honestly and admit that it was a 2-star read for me. I considered rounding up to 3 for the sake of the diverse rep, but the fact that it took me over a month to trudge through what should’ve been a really quick read made it impossible for me to justify upping my rating. If you enjoy sci-fi and Anastasia retellings, or normalized diverse rep in the YA SF/F field, I would say to pick this up and give it a try. As for me, I do own a copy of another of Ashley’s books, but I don’t think I’ll be rushing to pick it up.

I have no idea if this book is a series starter or a standalone, as it totally feels like a series starter but, at the time that I’m writing this review, I haven’t heard anything about it continuing as a series. I personally absolutely hated the cliffhanger ending of this book, and will not be picking up any sequels.

All quotes are taken from an ARC and may not match the finished publication. Thank you to Balzer + Bray for providing me with an ARC in exchange for my honest review!

‘#thighgap’: a twisted take on one model’s obsession