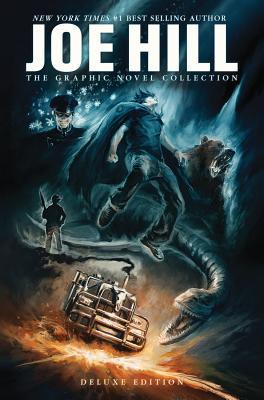 I love Joe Hill’s work in general, so when I realized there was an entire collection of graphic novel short stories that I hadn’t read yet, I was pretty excited and had to get my hands on it immediately. The Graphic Novel Collection features mostly hits with a couple of misses, and since there are only a few stories, I’ll break them down as such:

→ The Cape:
I thought this was a really solid introduction to the collection. It starts off by showcasing a boy who believes his “cape” (really a modified baby blanket) is magical, but he has a traumatic accident and grows up to be fairly damaged due to that. As he reaches adulthood, he becomes cynical towards everyone in his life, and upon finding that magical cape, decides to seek revenge. It’s really violent and pretty sad, but an extremely intriguing and fleshed-out story.

→ The Cape: 1969:
The second story is actually a prequel to the first, in which we learn how the cape got its powers — through a freak incident occurring to the father of the boy from the first story — and, more heavily, the way trauma can break a human being and turn them into a monster. I liked this one a lot less, but I can appreciate the need for backstory that it fulfilled.

→ Thumbprint:
A US veteran, discharged for abusing soldiers and civilians in the war in Iraq, finds herself in deep paranoia when she comes home and starts seeing hints of her past pop up. I think I’d have enjoyed this a lot more in an actual short story formatting, because it just didn’t translate well to the graphic novel. It doesn’t help that I strongly disliked the art style, and was horribly uncomfortable with a lot of the dialogue (though I know that was part of the point, to make the reader face how awful the happenings in Abu Ghraib were).

→ Kodiak:
A couple of boys meet a scarred man who tells them the story of how he got his scars — by fighting a vicious bear while being held captive in his youth. I thought this one was fun enough, even though it didn’t hold any similarity at all to what I typically expect from Joe’s writing (I don’t even think I’d call it horror).

→ The Wraith:
Finally, the collection ends with this graphic novel about Charlie Manx, the terrifying, vampire-esque villain from NOS4A2. Charlie is genuinely one of the most awful, worrisome, love-to-hate-him villains I’ve ever seen in my life, so I was excited to spend more time in Christmasland, and this graphic novel did not disappoint in the slightest. You could definitely read this without having read NOS4A2, but I wouldn’t recommend it, because the full story has such a deliciously dreadful, slow buildup to the big “reveal” of Christmasland and the children therein, that I think reading The Wraith first would be robbing yourself a little bit.

Here's Andrea Dawn, who apparently runs Tell-Tale Press and offers editing services. I hope you never support anything this racist does. And feel free to spread the word. The horror community is awesome and we don't need people like her.

if youre in downtown lawrenceville protesting pls leave now before 9 and the arrests start, but if you do stay & get arrested call 404-689-1519 and they will bail you out

Deleting your video and twitter are not the ways to respond when people are TELLING you that what you did was tone deaf.
especially when you were asking for people to educate you on how to be a better ally.

you’re not learning if you’re shutting down.