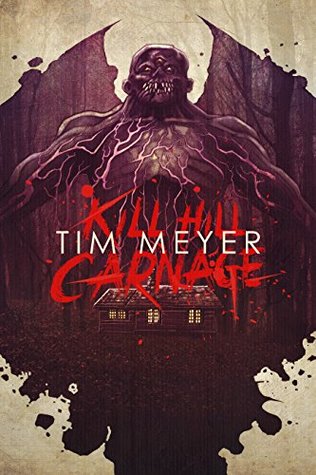 SYNOPSIS: In 1991, hell was unleashed upon Saint Christopher’s Summer Camp for Kids. The killers left behind piles of bodies and rivers of blood. Some say a family of inbred cannibals was responsible. A masked psychopath with a butcher’s knife is another popular theory. Some still believe a camp counselor lost his mind and went crazy on everyone with an axe. But there’s also the mysterious, derelict factory that sits nearby, atop Kill Hill. A place where urban legends are manufactured, the grotesque and bizarre.

Twenty-five years later, the factory on Kill Hill is still said to be operational, but no one can get near it. It’s safely guarded along with the secrets within. But there are a few loose strings and hitman Frank Harmon has been sent to tie them up. His kill list is short, but the night is long and full of unspeakable horrors. With the help of a few college students on an impromptu camping adventure, Frank must contain the mess at Kill Hill before it spreads to the neighboring towns. Before it infects the entire country. Before it invades the entire world.

My taste in horror is pretty varied—I like slow-creeping horror, gothic horror, psychological horror, horror comedy, gothic romance… but sometimes, I’m just in the mood for some solid gore, terror, and a little camp. When I’m in that mood, I usually can only find exactly what I’m looking for in films, but Kill Hill Carnage is the perfect example of how it’s done in book format.

It was here for mayhem and murder, and it would get what it wanted in large doses, oh yes it bloody would.

If I had to pick a subgenre for Kill Hill Carnage, I’d place it right in the middle of splatterpunk and creature feature, personally—but more than anything, it felt like an homage to the deliciously bizarre horror flicks of the late 80s and early 90s, which made it an immediate home run for me. It literally opens on a classic scene of two camp counselors being ripped to shreds mid-sex, and if that doesn’t give you major nostalgia, I don’t know what will.

I was endlessly entertained and could hardly stand to put this book down. It flies by, never lags for a moment, and I especially loved the moments when we were transported 25 years in the past, seeing all of this destruction befall Kill Hill for the first time. Tim Meyer’s got one hell of an imagination for death scenes, and the creatures he describes range from mildly terrifying to downright disgusting.

“Would you knock it off with that horror movie shit? No one wants to hear it right now!”

On top of it all, Tim’s writing is a treat all on its own. It’s fun and self-aware in all the right places, and it’s immersive enough that I felt like I was right there in the woods alongside these characters. Speaking of the characters, almost all of them are at least a little bit unlikable in that quintessential horror film style—you know the one, where you don’t get too attached to anyone but the final kid, so you don’t mind too much when you watch them all being slaughtered—but they’re fun to read about, and they’re fleshed out just enough.

If you’re looking for a good horror read with loads of gore, creepy monsters, and a touch of nostalgia, I absolutely recommend grabbing yourself a copy of Kill Hill Carnage. And remember… stay away from the river!

Thank you so much to the publicist and Sinister Grin Press for providing me with a review copy in exchange for an honest review!