The last mini review post went over well, so I decided to start making this an occasional thing! This week’s mini review round-up includes one 2 mangas, 1 graphic novel, and a novella!

SYNOPSIS:
When Jack Skellington’s faithful pet Zero gets lost, the ghost pup must get the help of the residents of Christmas Town to find his way back. With Halloween plans on hold while Jack mounts a search, will they be reunited in time to save both holidays?

Like many, I grew up on The Nightmare Before Christmas, and it still holds a certain nostalgia for me. I was pretty eager to check out this new Disney Manga series about my favorite character, little Zero the pup.

While the artwork is adorable and I love spending time with Zero, there’s not much of a story to this. Most of the book is just artwork depicting Zero running around getting into trouble without anything really happening. If you’re a massive fan of the film or have a young reader in your life, I’d recommend this, but if you’re like me—someone whose love for the film has begun to fade—I’d probably skip it.

Thank you so much to TOKYOPOP for providing me with this ARC in exchange for an honest review!

SYNOPSIS:
Mila is a quiet, solitary teenager ready to put another boring summer vacation behind her until she meets Agnes, an intriguing adventurous girl who turns out to be a ghost. And not just a regular ghost, but one carrying the essence of a fallen king, and a mouth full of teeth that used to be guardian warriors. She introduces Mila to a wondrous world of secret places and magic that exists deep beneath the ocean, and the occult battle for freedom that approaches . . .

That was one of the most bizarre, surreal, and unsettling graphic novels I’ve ever read… and I loved it so much I don’t even know how to explain why. Let me start with the artwork: 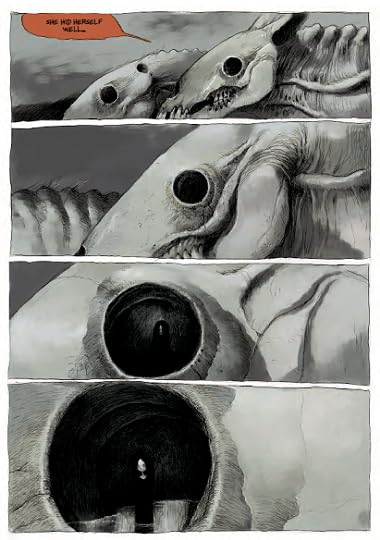 This is some of the most unique and quietly disturbing art I’ve ever seen in a graphic novel, and it works SO WELL for Watersnakes. The story starts off with Mila, a young woman who meets another girl and is immediately captivated by her presence, her looks, her… teeth? She begins to form a seemingly unhealthy obsession over the other girl, but meanwhile, strange dreams begin to plague her about a deep underwater cave full of spirits.

There’s nothing else I can say without spoiling the entire odd little plot, but let me just say that the artwork and story make this one well worth your time if you enjoy strange fantasy/horror crossovers.

Thank you so much to Lion Forge for providing me with this ARC in exchange for an honest review!

SYNOPSIS:
‘The Tales of Edgar Allan Poe’ is a brilliant collection of some of his best-known stories: ‘The Tell Tale Heart’, ‘The Cask of Amontillado’, ‘The Fall of the House of Usher’, ‘The Mask of the Red Death’, and ‘The Raven’.

I wasn’t quite sure what to expect from the Manga Classics line—I actually kind of expected them to be abridged or rewritten, whereas this is more like Poe’s writing with illustrations in a manga format—but as a die-hard, lifelong lover of Poe’s writing, this did not disappoint!

The artwork is different from one story to the next, but it’s all absolutely exquisite, with my favorite style belonging to the artist responsible for The Raven, as it’s very fluid and whimsical in a sense. I thought the illustrations matched the stories perfectly and it really was such a fun way to reread these old favorite stories. I highly recommend it not only for long-time fans of Poe, but also for those who are looking to read these stories for the first time! There are also some fun little factoids about Poe’s career as a writer and his personal life strewn between the stories.

Thank you so much to Udon Entertainment for providing me with this ARC in exchange for an honest review!

SYNOPSIS:
When he’s not holding down a dead-end job or lurking in his mother’s basement, Tony Anastos spends his time shooting ultra-low-budget horror flicks. After meeting his sexy fame-hungry coworker Anna, he sees an opportunity to launch his career into cult stardom. But when Tony’s plan to jolt their next film’s Kickstarter into overdrive calls for real blood, he will sacrifice the last bit of his humanity for a shot at recognition. But it makes sense. Look at him. The stuff he makes, I mean, he’s the first one you expect.

Look at me. The stuff I buy, the shit I’ve made. I’m the first one you expect.

It’s a really fun, intriguing story that I think every horror film lover can appreciate. You can tell that Cesare knows his horror films, and he throws in all of these fun little references and remarks that are terribly enjoyable to sift through.

Unfortunately, I couldn’t stand the narrator. He’s awful, crude, and his attitude towards everyone around him is just gross. I get that he’s intended to be this walking cliche of sorts—at least, I assume it’s intentional—but it was too over the top and cringe-y for me. If it hadn’t been for that, and the fact that the ending felt weird and anticlimactic to me, I think this would have received much higher marks from me.

That said, The First One You Expect is still a damn good time and I will happily be checking out more of Adam Cesare’s work in the future!