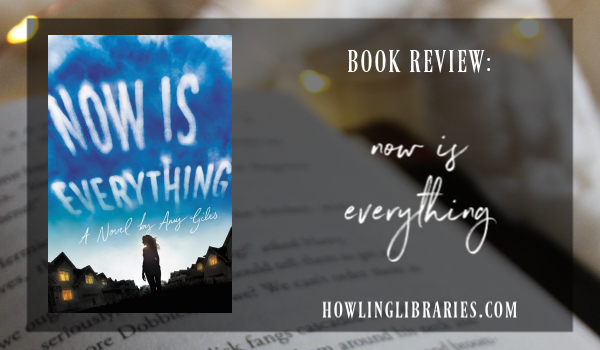 Our now may be nothing compared to the billions of years and stars that make up the universe, but maybe now is all we can ask for.

Now Is Everything is a story told in two times: then and now. Then, we watch Hadley struggle through life with an abusive father, doing everything she can to protect her younger sister, and sacrificing anything it takes to live life to the fullest – having friends, falling in love – without suffering her father’s wrath.

Now, Hadley is a patient in a hospital, having narrowly survived the plane crash that took her family.

I’m a million shattered pieces. Tiny shards that will cut anyone who tries to clean up my mess.

Hadley is one of the best narrators I’ve had the pleasure of reading in a contemporary novel in a while. When I was close to giving up on ever genuinely adoring another contemporary title, this book came along, and I fell so in love with Hadley’s voice. Despite the misery that is her home life, she is so incredibly strong and fiercely protective of her younger sister.

Hadley’s trauma and PTSD are portrayed so believably; while it doesn’t saturate her every waking thought, it’s easy to see that each and every choice Hadley makes is influenced by her fear and hatred of her father. Through it all, though, she learns to fall in love and to trust.

If you tallied up the word counts, I think we spent a lot more time in the then stage than the now, but maybe that’s just because I found myself so incredibly anxious during the then chapters.

It’s so interesting, in the beginning of the book, to watch the times change and try to decipher exactly what happened that made Hadley who she is now. You find yourself desperate to know what has brought this girl to attempt suicide now? Her attempt is a perfect example of how traumatic abuse is: even when one escapes it, it lingers with us, always.

Pain is quickly forgotten. It’s the violence I always remember. The rage. The hate.

Every moment of Hadley’s life is pure struggle for survival between fights with her father, and I had to put the book down and focus on other things a few times because the dread was too much. That’s not a bad thing; this book is just intense! Mr. McCauley is positively terrifying, and while he never really takes you off-guard, you can’t help but cringe every time the hammer strikes.

The abuse isn’t purely physical or verbal; it’s also emotional and mental, particularly in the way Hadley’s father realizes he can hurt his eldest daughter by turning his attention on the youngest, Lila. Hadley’s younger sister is so innocent and precious and strong-willed, and I spent so much of this book positively begging for nothing to happen to her. Every glare or threat from their father made my heart ache horribly.

That’s when I realize Charlie isn’t a quitter. Charlie’s a survivor.

To keep this book from being too soul-crushing, there is a light spot in Hadley’s memories: Charlie Simmons, the sweet first love who’s offered Hadley an escape from her nightmares. The romance is definitely a strong theme in this book, but felt more like a sub-plot rather than the main focus, which I appreciated – this isn’t the kind of story that needs to be sugarcoated with nonstop cutesy love scenes and kisses.

If abuse and/or suicidal thoughts in books put you in a bad place, please think long and hard before picking this book up. I have never loved a book so thoroughly while simultaneously so strongly feeling that some of my loved ones should not read it (unless they’re in a very good place and prepared for a lot of self-care afterwards). This book is important, it is beautiful, it is heartbreaking, it is devastating, but most of all… it is terrifying, intense, and painful.

Amy Giles has spun an incredibly touching story and I will absolutely pick up future releases from her.

All quotes are taken from an unfinished ARC and may differ from the final release. Thank you so much to HarperTeen for giving me this ARC in exchange for an honest review! 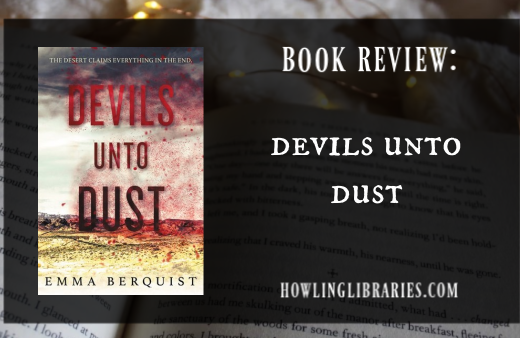 PSA: my 25 year old son watches all the horror. All the movies. He told me the other day I’m not allowed to watch MEN. He said, “One of the most disturbing movies I’ve seen in a long time. Stay away from it, mom.”
.
Let this serve you well people who love the horrors.

Tag Time: Get to Know the Fantasy Reader! https://howlinglibraries.com/fantasy-reader-tag-2022/