TITLE: Obsidio
AUTHOR: Kristoff, Jay; Kaufman, Amie
RELEASED: March 13th, 2018; Knopf Books for Young Readers
GENRE: Sci-fi
AGE RANGE: YA
SYNOPSIS: Kady, Ezra, Hanna, and Nik narrowly escaped with their lives from the attacks on Heimdall station and now find themselves crammed with 2,000 refugees on the container ship, Mao. With the jump station destroyed and their resources scarce, the only option is to return to Kerenza—but who knows what they’ll find seven months after the invasion?
Meanwhile, Kady’s cousin, Asha, survived the initial BeiTech assault and has joined Kerenza’s ragtag underground resistance. When Rhys—an old flame from Asha’s past—reappears on Kerenza, the two find themselves on opposite sides of the conflict.
With time running out, a final battle will be waged on land and in space, heroes will fall, and hearts will be broken.

NO OBSIDIO SPOILERS! (However, proceed at your own risk if you haven’t read Gemina!)

Wow. Where do I even begin? This is one of my favorite series of all time, and I was so eager and terrified to see it end. Jay and Amie have scripted the most beautiful world, with the most lovable, endearing characters, and I was horrified to see how the war would end—but, above all else, I knew this would be a ride I couldn’t miss. I genuinely don’t even know how to break this review up, because I don’t know how to explain to you all just how much this book meant to me, and how perfectly satisfied I was with it as the ending to our journey. 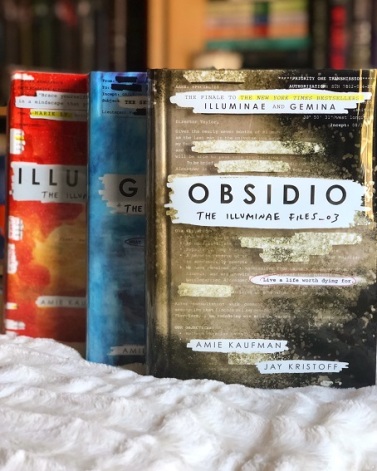 Kady looks back and forth between the girls and shrugs.
“At least our lives will have been worth dying for.”

→ Kady Grant / Ezra Mason ←
Our original duo, and quite frankly, my favorites. I loved them in the first book, but we see an entirely different side of the couple in the finale. They’re exhausted, beaten down, grieving, and full of rage, but they’re still clinging to hope. If anyone can put on a strong front and pretend like everything isn’t going to hell around them, it’s these two. Kady is one of my favorite female protagonists of all time, and she didn’t let me down. She’s wickedly intelligent, and an emotional powerhouse who manages to ground everyone around her, no matter how bad things get. Ezra is honestly the perfect counterpart to her with his humor and warmth, and I would be the first one in line for a 600-page collection of pure fluff and cuteness between these two.

And he kisses her like she’s the first, last and only thing he’ll ever need, like he’s learning every last part of her. Reverently, like this moment is holy.

→ Hanna Donnelly / Nik Malikov ←
I wasn’t sure how I would feel about watching the two couples meet and interact with one another—would they mesh well? Would it feel natural?—but it was honestly perfection. With her astonishing strength and fighting prowess, coupled with her tactical brain and wit, Hanna meshes beautifully with Kady. Nik and Ezra are both our natural pros at banter, and the two of them together? Hilarious. Constantly a bright spot in horrifically dark times, and I loved the reprieve their taunts and jabs offered. Hanna and Nik together, though? I know a common complaint in Gemina reviews is that they didn’t know each other well enough to fall for one another, and I won’t spoil anything, but that topic is touched on really solidly in this finale, and I applaud the authors for being willing to tackle it on page.

“We invaded these people’s homes, Cherry. Bombed them to ███. Killed their families. You think this isn’t a battle? This is a ████ing war.”

→ Asha Grant / Rhys Lindstrom ←
When I first learned that Asha would be one of our protagonists in Obsidio, I was stunned. I’d been perfectly content to count her a loss in the first two books, when Kady mourned the loss of her cousin, but I’m really pleased that she was included as a character. She didn’t feel quite as three-dimensional as the other girls did to me, but I think that was fully to pin on the fact that this book was non-stop action and suspense with very little time for a lot of character development. Rhys struggled with the same problem, but despite not getting to spend much alone time with either of them, I still enjoyed them tremendously as characters and was certainly rooting for them throughout the entire thing. There’s a sub-plot arc with Asha and a little girl she’s rescued named Katya, and the maternal vibes it gave off? Everything.

I feaR this ship will neeD knives soon, Little SpiDeR.

→ Ella Malikova ←
Everyone’s favorite little hacker girl did not fail to impress in this installment. I absolutely adored Ella in Gemina and desperately hoped she would get a substantial amount of screen time in the finale, so I was beyond ecstatic to spend so much time with her. True to her nature, she is still hilarious, snarky, and brilliant with a keyboard—but she also develops in the sense that we see her develop an affection for Hanna that is sisterly and precious. I love my little Spider girl, and what I wouldn’t give for a whole spin-off about her.

She cradles me to her breast
and I cannot feel the warmth of her skin.
Cannot hold her as she holds me.
And I cannot recall ever feeling so alone.
< error >

→ Artificial Intelligence Defense Analytics Network ←
I am without words. AIDAN plays such a tremendously fascinating role in this story—truly, it would be nothing without its logic, vicious honesty, and fiercely protective nature of Kady, the last of which we see bloom quickly in this final installment. If you noticed AIDAN growing more human-like and emotional in Gemina, just wait until Obsidio, where we get to see it depict humor, sorrow, loneliness, and even jealousy. There’s nothing that I can really tell you about AIDAN without offering up a million spoilers for this finale, so I’ll just say that, if you love AIDAN even half as much as I do, I don’t think a single part of you will be disappointed by this book.

I know their names.
I
know
their
faces.

→ supporting cast ←
There are a million and one characters in each installment of this story, and Obsidio is no different, but they each feel so complex and unique and perfectly human that I am consistently stunned by how easy it is to keep them all apart. We have entire spaceships and armies full of supporting characters, so I’ll just name a few favorites:

“The die is cast. But today we will shake the table upon which it lands.”

→ action and war ←
While the other two books had plenty of scenes that were written for character development, or plotting, or explaining the ins and outs of spacetime, dimensions, ships, etc., Obsidio comes in with a hook and doesn’t relent until the very end. There is so much action and tension in this story that I literally spent the last 150 pages with a feeling of nausea I couldn’t quite shake. There were pages that left me trembling, sobbing so hard I could not think straight—much less see the words on the pages. I cannot express to you how invested I was in this story, and how desperate I became to reach the end and see where the die would fall. The final battle was scripted so fluidly and to utter perfection; I could not, and would not, have asked for more.

→ final thoughts ←
If my incessant gushing and compliments to Jay and Amie’s storyweaving has not been enough to sell you on this book, I can’t think of a single other thing I could say to do the job, honestly. As I mentioned at the start, The Illuminae Files is, without question, one of my favorite series in life, and I can only count one or two other series in the world whose finales have pleased me as much as Obsidio did. I cannot recommend this series, and this book, highly enough, and I sincerely hope that you will give it a try. I cannot wait to see what Jay and Amie craft in their next adventure together.