As I mentioned in my October wrap-up earlier this week, I received a lot of eARCs in October! Since there were so many, and a ton of my blogging friends also enjoy reading eARCs, I thought I’d give them their own haul post along with links and mini descriptions, in case any of you want to request some of these for yourself!

By the way, this is officially my 200th blog post! Woooooooo!

The Glass Spare (The Glass Spare, #1) – fantasy, 10.24.17
Wil Heidle, the king’s daughter, has a touch that turns people to gemstone. When her father’s scheming brings impending war on the horizon, Wil has the opportunity to use her power: will she help her father, or betray her family?

Devil in Ohio – horror, 11.07.17
A strange, damaged girl lives with a family after escaping a cult in this debut YA suspense/thriller that was inspired by true events.

Everless (Untitled, #1) – fantasy, 01.02.18
In the land of Sempera, time is extracted from blood and used as payment. Jules Ember and her father were once servants at Everless, the wealthy Gerling family’s estate, but were cast out after of a fateful accident a decade ago. Now, Jules’s father is reaching his last hour, and she will do anything to save him.

Miles Away From You – contemporary, 03.20.18
When Miles’ trans girlfriend’s suicide attempt leaves her on life support, Miles goes on a journey to Iceland in hopes of learning how to say goodbye. The story is told through instant messages, and offers a tale of heartbreak, healing, love, and loss.

Devils Unto Dust – western/horror, 04.10.18
Ten years ago, a horrifying disease began spreading across the West Texas desert. Infected people—shakes—attacked the living and created havoc and destruction. No one has ever survived the infection. Western meets horror for this riveting story about survival, family, and inner strength.

Dread Nation – horror/historical fiction, 04.03.18
Jane McKeene was born two days before the dead began to walk the battlefields of Gettysburg and Chancellorsville. In this new nation, safety for all depends on the work of a few, and laws require certain children attend combat schools to learn to put down the dead. But there are also opportunities—and Jane is studying to become an Attendant, trained in both weaponry and etiquette to protect the well-to-do. It’s a chance for a better life for Negro girls like Jane. After all, not even being the daughter of a wealthy white Southern woman could save her from society’s expectations.

Gray Wolf Island – mystery/fantasy, 10.10.17
Right before Sadie died, she begged her sister, Ruby, to do the one thing she could never do herself: Find the treasure on Gray Wolf Island. With just a mysterious treasure map as a guide, Ruby reluctantly allows some friends to join her on the hunt, each of whom is touched by magic. Each of them is also keeping a secret—something they’ll have to reveal in order to reach the treasure.

When My Heart Joins the Thousand – contemporary, 02.06.18
A heartbreaking debut YA romance featuring a neurodivergent girl with a tragic history and the chronically ill boy trying to break the vault encasing her heart.

Love, Life, and the List – contemporary, 12.26.17
Everyone knows Abby Turner is in love with her best friend, Cooper Wells. Including Cooper Wells. But despite what people tell her, it doesn’t affect their friendship. And she’s practically over it, anyway. This is the first in a set of three standalone books with crossover characters.

Beyond a Darkened Shore – fantasy, 04.10.18
The people of Mide have thankfully always been safe because of Ciara’s unearthly ability to control her enemies’ minds and actions. But lately, a mysterious crow has been appearing to Ciara, whispering warnings of an even darker threat. Although her clansmen dismiss her visions as pagan nonsense, Ciara fears this coming evil will destroy not just Éirinn, but the entire world.

The Queen’s Rising (Untitled Trilogy, #1) – fantasy, 02.06.18
With war brewing between the two lands, Brienna must choose whose side she will remain loyal to—passion or blood. Because a queen is destined to rise and lead the battle to reclaim the crown. The ultimate decision Brienna must determine is: Who will be that queen?

The Traitor Prince (Ravenspire, #3) – fantasy, 02.13.18
Javan Najafai, the crown prince of Akram, has spent the last ten years at school, far away from his kingdom. He’s been eagerly awaiting his return home to his ailing father, but his journey there goes dangerously wrong. A mysterious imposter has taken his place—and no one will believe Javan is the true prince. (The Ravenspire series books can be read apart from one another, offering only minor character cameos.)

Goldeline – middle grade fantasy, 11.14.17
In this gorgeously written middle grade debut reminiscent of the work of David Almond and The Thickety, a young girl embarks on an unforgettable journey through a Southern-infused fairy-tale forest filled with dark and wondrous magic.

Honor Among Thieves (The Honors, #1) – sci-fi, 02.13.18
When Zara commits a crime that has her running scared, jail might be exactly where she’s headed. Instead Zara is recruited into the Honors, an elite team of humans selected by the Leviathan–a race of sentient alien ships—to explore the outer reaches of the universe as their passengers. Zara seizes the chance to flee Earth’s dangers, but when she meets Nadim, the alien ship she’s assigned to along with fellow Honor Beatriz, Zara starts to feel at home for the first time, along with a devotion she’s never experienced before.

Elementals: Ice Wolves (Elementals, #1) – middle grade fantasy, 03.27.18
Everyone in Vallen knows that ice wolves and scorch dragons are sworn enemies who live deeply separate lives. So when twelve-year-old orphan Anders takes one elemental form and his twin sister, Rayna, takes another, he has to question whether they are even related. Still, whether or not they’re family, Anders knows that Rayna is his best and only true friend.

A Conspiracy of Stars (Untitled Duology, #1) – sci-fi, 01.02.18
Octavia only dreams of becoming one of the scientists who study the natural wonders of Faloiv. The secrets of the jungleare protected by the Council of N’Terra, so when the rules suddenly change, allowing students inside, Octavia should be overjoyed. But something isn’t right. The newly elected leader of the Council has some extremist views about the way he believes N’Terra should be run, and he’s influencing others to follow him. When Octavia witnesses one of the Faloii—the indigenous people of Faloiv—attacked in front of her in the dark of night, she knows the Council is hiding something.

The Poet X – poetry/contemporary, 03.06.18
A young girl in Harlem discovers slam poetry as a way to understand her mother’s religion and her own relationship to the world. Debut novel of renowned slam poet Elizabeth Acevedo.

The Dangerous Art of Blending In – contemporary, 01.30.18
Evan’s strict Greek mother refuses to see him as anything but a disappointment. His quiet, workaholic father is a staunch believer in avoiding any kind of conflict. And his best friend Henry has somehow become distractingly attractive over the summer. Tired, isolated, scared—Evan’s only escape is drawing in an abandoned church that feels as lonely as he is.

Here We Are Now – contemporary, 11.07.17
Tal’s mother, born in Jordan and very secretive about her past, won’t say a word about who her dad really was. But when Tal finds a shoebox full of old letters from Julian Oliver, she begins to piece the story together. Then one day, completely out of the blue, Julian shows up at her doorstep, whisking her away to meet her long-estranged family.

Heart of Iron – sci-fi, 02.27.18
Seventeen-year-old Ana is a scoundrel by nurture and an outlaw by nature. Found as a child drifting through space with a sentient android called D09, Ana was saved by a fearsome space captain and the grizzled crew she now calls family. But D09—one of the last remaining illegal Metals—has been glitching, and Ana will stop at nothing to find a way to fix him.

The Tombs – historical fiction, 02.20.18
New York, 1882: no place for a girl with unexplainable powers. Avery Kohl pines for the life she had before her mother was taken. She fears the mysterious men in crow masks who locked her mother in the Tombs asylum for being able to see what others couldn’t. When she causes a bizarre explosion at the factory, she has no choice but to run from her lies, straight into the darkest corners of the city. Avery must embrace her abilities and learn to wield their power—or join her mother in the cavernous horrors of the Tombs. And the Tombs has secrets of its own: strange experiments are being performed on “patients”…and no one knows why.

Now is Everything – contemporary, 11.07.17
The McCauleys look perfect on the outside. But nothing is ever as it seems, and this family is hiding a dark secret. Hadley McCauley will do anything to keep her sister safe from their father. But when Hadley’s forbidden relationship with Charlie Simmons deepens, the violence at home escalates, culminating in an explosive accident that will leave everyone changed.
NOTE: I’ve actually already finished this one, and will be posting a review soon. What I can tell you is that it was an incredibly difficult read, but I did not hesitate to give it 5 stars.

A Dash of Trouble (Love Sugar Magic #1) – middle grade fantasy, 01.02.18
The novel follows a girl who discovers that she comes from a long and distinguished line of brujas – witches of Mexican ancestry. But when she bungles a spell, she must race to fix it before her mother and sisters find out she’s been practicing magic in secret.

Do any of these strike your interest? Or maybe you’ve read some of them already – let me know in the comments! 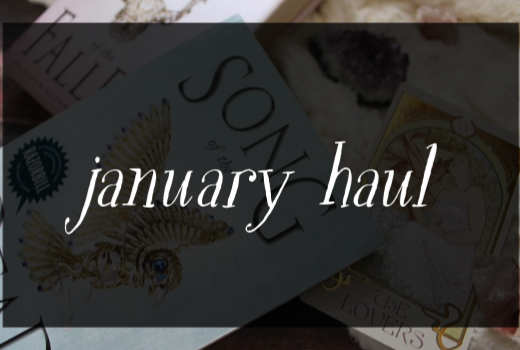 January Haul: my first bookoutlet order in almost a year?!

May Haul: Too many library loans! 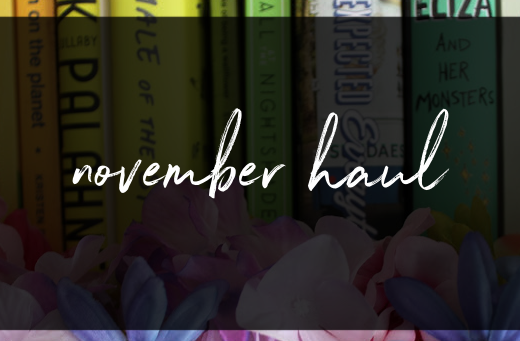 I don't read much horror but if you need recs then Destiny is your go to person 🖤 #bookrecommendations https://twitter.com/howlinglibrary/status/1292519233176436736