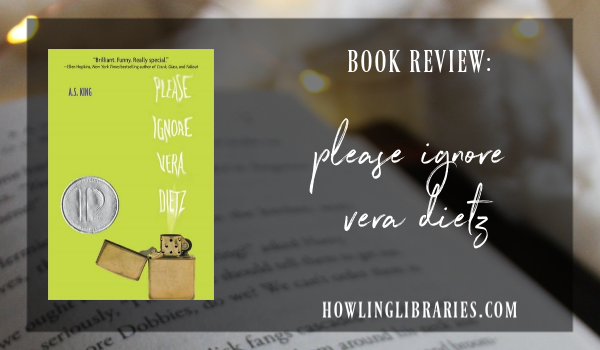 When Vera loses her best friend, Charlie, in an apparent suicide after he leaves her for the wrong crowd, everyone expects her to mourn. Nobody expects her to take up drinking in her father’s footsteps, or to start seeing visions of Charlie everywhere she goes: in bathrooms, in the car, on her eyelids when she sleeps. He’s begging her to clear his name, to find the truth about his death. Can she set aside the hurt he left her with long enough to clear his name – and what will she find out about herself in the process?

Please Ignore Vera Dietz was a title that had been on my TBR list for just south of four years, according to Goodreads. When I received a sale email a couple of months ago that listed it as $1.99 on iBooks, I bought it, but still didn’t pick it up until a few days ago. It was a little slow getting into, because it started off feeling like most other “teen grief” books; give King a chance, though, and you’ll see she brought something different to the table with this title. I took off a star because I found the narrator a little hard to really connect and empathize with, despite her hardships, but all in all, it was an enjoyable read that I’d recommend to anyone who likes teen contemporaries.

“PeRsOnAllY iF I wAs SeXuALLy AsSauLtEd I wOuLd HaVe SpOkE uP aBoUt It RiGhT AWAY” literally go fuck yourself. Most girls don’t process the fact that they were sexually assaulted until YEARS LATER. And if you think like this block me and we aren’t fucking friends