SYNOPSIS: The war is over, and army priest Tomas Piety finally heads home with Lieutenant Bloody Anne at his side. When he arrives in the Stink, Tomas finds that his empire of crime has been stolen from him while at war. With his gang of Pious Men, Tomas will do whatever it takes to reclaim his businesses. But when he finds himself dragged into a web of political intrigue once again, and is forced to work in secret for the sinister Queen’s Men, everything gets more complicated.

When loyalties stretch to the breaking point and violence only leads to violence, when people have run out of food, and hope, and places to hide, do not be surprised if they have also run out of mercy. As the Pious Men fight shadowy foreign infiltrators in the backstreet taverns and gambling dens of Tomas’s old life it becomes clear; the war is not over.

Sometimes, you read a synopsis, and it’s like you just can’t get your hands on that book fast enough, right? That was Priest of Bones for me. I initially heard it marketed as “Peaky Blinders with swords”, and given how badly I’ve been meaning to find the time to watch Peaky Blinders, that felt like a sign that I should snatch this one right up! Antiheroes, gangsters, crime lords, and a general moral greyness on top of it all? It should’ve been a recipe for perfection!

There was a devil in me, and all my crew knew it. 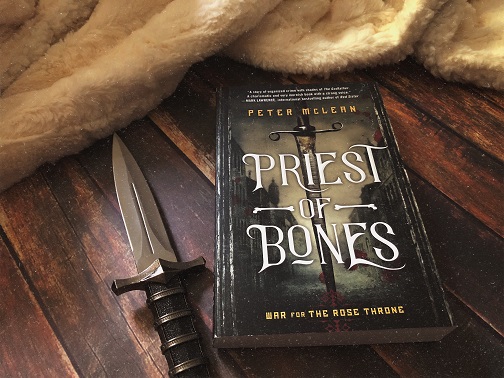 Unfortunately, I vastly oversold this one for myself. I hadn’t reached the end of the first few chapters before I realized that the narrative was going to be a struggle for me, and it was to the very end. It’s not that the writing is bad by any means—in fact, I think Peter McLean is talented, and this book is going to find many readers who will love his style—but I couldn’t connect with Tomas to save my life.

Not only was Tomas impossible to attach myself to, each character in this story was wholly unlikable for me. I usually love morally grey characters and antiheroes, so that wasn’t the problem—this massive cast of characters was mostly just simplified and uninteresting. The closest I ever came to caring about anyone was Tomas’ right-hand woman, Bloody Anne, a violent, angry lesbian with a scarred face and a terrible fear of magic. She’s likable enough at times, but even she just fell flat for me much of the time. On the flip side, the worst character for me by far was Ailsa, the potential love interest, whom I wanted to throttle every single step of the way.

The world-building is another thing I want to comment on here, because I think it is going to be polarizing for a lot of readers. On one hand, the setting is really enjoyable; I love grimy city settings for stories, especially when crime lords and gangs are involved, and McLean’s writing is just atmospheric enough that you can feel the smog and filth of the surroundings. On the other hand, nothing feels built up enough. There’s a magic system that we learn very little about, and for there to be so much history in the city of Ellinburg, most of it seems to have been casually tossed away or swept under the rug. This is something that I suspect will be further fleshed out in the second book, but I still felt that it was worth mentioning for anyone who—like me—enjoys a lot of world-building in their fantasy series starters.

On a more complimentary note, something I enjoyed was the fact that McLean doesn’t shy away from brutal topics (as you’ll see by the long list of content warnings I’ll insert at the end of this review), but all the same, most of those issues are challenged by Tomas’ narrative. He opens the book by murdering one of his own men right off the bat for attempted rape, and that absolutely sets the tone for what an honorable man Tomas is at heart. Everything he does is for the sake of the citizens of Ellinburg and his loved ones, and it lends an interesting side of nobility to him.

My only complaint regarding the content warnings below is the endless fat-shaming regarding one of his men. It doesn’t carry any real venom, and it’s casual enough that most readers will miss it, but it is so constant; the man’s nickname is literally ‘Fat Luka’, and we can’t spend a single scene with him without a comment being made on his appearance, despite the fact that what should be the focal point is what an incredibly valuable asset he becomes to Tomas. Instead, it often felt like Luka’s triumphs were constantly overshadowed by his size.

Our Lady doesn’t help. Not ever. She doesn’t answer prayers or grant boons or give a man anything at all, however hard he might pray for it.

At the end of the day, Priest of Bones is not a bad story. McLean has some really enjoyable storytelling qualities, I loved the setting, and the plot itself is fine, if a bit unremarkable. Given the lack of attachment to the narrative, the fact that I couldn’t connect to the characters, and the gradual realization I had that I simply did not care about how the story will end, I can’t recommend it for anyone whose reading tastes match mine. That said, this is the kind of story that will have its intended audience, and if you think there’s even a slim chance you may be in that group, I strongly suggest picking up a copy and trying it for yourself.

Thank you so much to Ace Books for providing me with this ARC in exchange for an honest review!

Buddy read with Kaleena—check out her review, too, for a more positive take on this story!

ETA: There are so many things I felt about this book that I couldn’t figure out how to explain, but Mogsy described PERFECTLY in this review, so please check it out!

If you support women’s wrongs, you need this book. (I loved it!)

I’m SO excited to share that my YA thriller, IT’S ONLY A GAME, will be out with @bloomsburykids in spring 2024!! 🎉🎉

Thank you to my awesome editor, @kellogg_camille, & wonderful agent, @jenazantian, for making this happen! Can’t wait for you all to meet Marina & her friends!!

It's my great pleasure to announce the title of the companion novel to A DOWRY OF BLOOD, forthcoming from Orbit in February of 2024 🥀

AN EDUCATION IN MALICE is a bloodstained love letter to ambitious girls, all-consuming desires, and the agonies and ecstasies of academia.

I wanted to take a moment to address why Firestorm is one of the last businesses in #Asheville requiring masks, and be open about the ways that this impacts our co-op. 1/9