SYNOPSIS: Beware of the woods and the dark, dank deep.
He’ll follow you home, and he won’t let you sleep.

Who are the Sawkill Girls?

Three girls’ stories come together on the island of Sawkill Rock, where gleaming horses graze in rolling pastures and cold waves crash against black cliffs. Where kids whisper the legend of an insidious monster at parties and around campfires.

Where girls have been disappearing for decades, stolen away by a ravenous evil no one has dared to fight… until now.

This is one of those reviews that I had to sit on for a while, because I had so many things I wanted to say about this book, and I just couldn’t quite figure out how to condense them into anything even remotely resembling a sensible length of review. Sawkill Girls is being marketed fairly heavily as horror, but it’s fabulism, too, with a world so gorgeously complex that I can’t ever quite determine if I adore it or am terrified of it.

Come for a while, reads the sign at Sawkill’s ferry dock, and stay forever.

At Sawkill Rock, the beauty of the island masks a terrible, dark secret: girls keep going missing, and they’re being lost more frequently every year. Nobody knows where they go, and it’s almost become an accepted status quo among the people of the island. The atmosphere of Sawkill Rock is one of the most immersive settings I’ve ever read; I felt transported so fully into the island’s grasp that I couldn’t help the dread worsening in my gut with every chapter’s passing. Claire Legrand’s writing voice is superb here—having read previous work by her, I genuinely believe that this is where she is meant to be.

My little rock, her mother would say. My grave little mountain.

There are three main characters to this story, with chapters alternating between their perspectives, and my favorite was Marion, who broke my heart over and over again with the loss of her loved ones and, consequentially, her slackening grasp on normality. The representation in this entire book is amazing, and Marion is bisexual and fat, which is a combination I’ll never tire of (because, hello, it’s me!). These facts are dropped so casually that there’s no room for argument—there is no homophobia or body hatred, despite an occasional very brief moment of self-consciousness on Marion’s part. Beyond her appearance and sexuality, Marion is so tough, and pragmatic, and determined to keep up a strong front. I’ve always been the same way, and so, I constantly saw myself mirrored back in her character.

Don’t lose yourself to him, my darling one, Sylvia Mortimer had said. Not all of you. Keep a morsel for yourself.

Though it took me a little longer to warm up to Val Mortimer, I grew fond of her, too. She first appears as this over-simplified “queen bee” persona, but we quickly get to see a side of her that’s so much darker and more haunted than anything you’d imagine (and she’s queer, though we don’t know what her label is). There are quotes in her chapters that have haunted me since the moment I finished this book, and you should be warned that her perspectives frequently depict suicidal ideation and abuse.

Zoey’s laugh was bitter. “Oh, and we poor delicate girls are vulnerable and desperate, is that what you’re saying?”

Finally, there’s Zoey, who is black and asexual (on page—there’s an entire facet to her back story revolving around this aspect of her life), and even more than that, she’s so determined and stubborn and absolutely lovable despite being a fairly “unlikable” character. She’s stern and feisty, and while I’m not sure if she will be everyone’s cup of tea, I was delighted by her antics and unpredictability.

It did not relish tying an innocent to the burden of its ancient might. But the Rock required an infantry.

Okay… I lied, sort of. There’s a fourth character, but it’s hard to explain. The Rock gets the occasional perspective chapter, and while they’re incredibly short and typically entirely vague, they may have been my absolute favorites. These passages read so lyrically and they are so incredibly haunting. I’ve never read a book where a place was given a thinking, feeling sentience to this degree, and it adds the most amazing layer to the story.

“What I’m saying is that girls hunger. And we’re taught, from the moment our brains can take it, that there isn’t enough food for us all.”

On top of the beautiful cast of characters and the haunting atmosphere, this story is so feminist, so empowering and bold and unapologetic. I can’t tell you how strongly this parallels the real world and the ways society casts teen girls aside, nor can I describe how badly I wish I’d had this story as a teen—a story to tell me that it’s okay to be strong, and angry, and queer, and brave, and in need of another mountain to lean on.

You are mighty. You are one, and one, and one.
You are fragile. You can move mountains.
You are breakable. You will never break.
This power is mine. And now it is yours, too.

I know I said I’d keep this to a reasonable length, and I’m trying, but Sawkill Girls is one of those stories that I feel has changed me in a way. 2018 has been the year of brilliant, fiercely feminist reads for me, and this one easily joins the ranks of my favorites. I want everyone and anyone I know to pick up a copy of this gorgeous, spooky little book, because it packs such a punch, and I only hope that it will get even half of the hype it deserves.

All quotes come from an advance copy and may not match the final release. Thank you so much to Katherine Tegen Books for providing me with this ARC in exchange for an honest review! 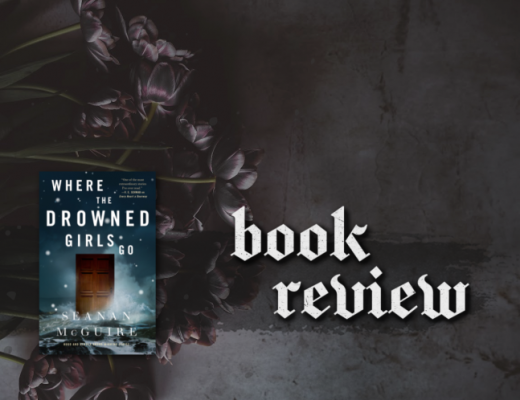