TITLE: Siege and Storm
AUTHOR: Leigh Bardugo
RELEASED: June 4th, 2013; Henry Holt and Company
GENRE: Fantasy
AGE RANGE: YA
SYNOPSIS: Hunted across the True Sea, haunted by the lives she took on the Fold, Alina must try to make a life with Mal in an unfamiliar land. She finds starting new is not easy while keeping her identity as the Sun Summoner a secret. She can’t outrun her past or her destiny for long.
The Darkling has emerged from the Shadow Fold with a terrifying new power and a dangerous plan that will test the very boundaries of the natural world. With the help of a notorious privateer, Alina returns to the country she abandoned, determined to fight the forces gathering against Ravka. But as her power grows, Alina slips deeper into the Darkling’s game of forbidden magic, and farther away from Mal. Somehow, she will have to choose between her country, her power, and the love she always thought would guide her–or risk losing everything to the oncoming storm.

First we had to find the firebird. Until then, all our hopes rested on the shoulders of one untrustworthy prince.

If you’ve read my review for Shadow and Bone (especially if you read my reread update that was recently added), you already know that I have some very ambivalent feelings towards this series. When I first started it, I loved it, but by the time I reread it, I had read so many incredible YA fantasy novels that I lowered my rating on it. I was told the series improved drastically as it continued, so I had high hopes for Siege, but I found that many of the same old problems persisted (or worsened) in this installment. 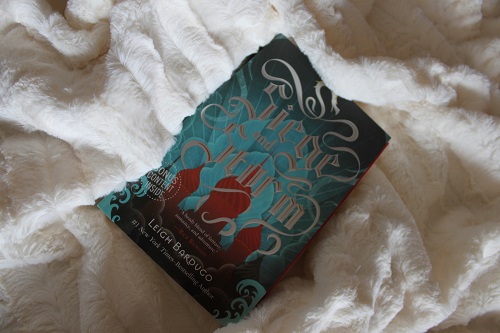 I couldn’t deny what I’d felt in Novyi Zem or the truth of what the Darkling had shown me: my own sadness, my own longing, reflected back to me in his bleak gray eyes.

→ Alina Starkov ←
I thought, for a long time, that my single biggest problem with the Grisha series was Mal, or the romance, but it’s not. Honestly, my biggest problem is Alina. She’s not tremendously flawed or obnoxious or cruel, she’s just boring, uneventful, angsty, and feels far less capable than she’s intended to be. While we’re constantly told that she’s this incredible Sun Summoner who can all but level entire cities with her powers, and everyone fawns over her as though she’s the most majestic being to ever walk the earth, she feels like an anxious, insecure, unremarkable teen girl—not that there’s anything wrong with those characters at all! It’s just hard to appreciate when the character is being lauded as incredible, but we’re being told instead of being shown her prowess.

“Mal’s always been like that. You could drop him in a camp full of Fjerdan assassins, and he’d come out carried on their shoulders. He just blooms wherever he’s planted.”
“And you?”
“I’m more of a weed,” I said drily.

→ Malyen Oretsev ←
Mal is… frustrating. That’s the best word I can think of for him. (The second best would be “exhausting”.) One minute, I’m feeling a little bit sorry for him—the next, I’m dying for someone to whisk him away to literally anywhere that doesn’t involve Alina interacting with him, talking about him, or thinking of him. Every step forward is chased by four steps back.

“You know, for two people with a love eternal, you’re awfully insecure.”

In theory, he doesn’t sound like he should be so awful—he’s her best friend, he loves her, he says kind things to her, he’s lonesome and sad and feeling altogether unwanted and pitiful—but he manages to execute these behaviors in such an unlikeable way, whether it’s second-guessing all of Alina’s decisions, acting so possessive over her I could gag, or turning himself into the object of every pity party, with no apparent regard for how the current situation is affecting anyone else. And don’t even get me started on his little fiasco with Zoya and kvas.

This was what they would be talking about: the prince who remembered an ordinary soldier’s name, the prince who had fought side by side with them without concern for wealth or pedigree.

→ Nikolai Lantsov ←
Ah, the infamous Nikolai. Literally the only genuine motivation that kept telling me I had to finish this series was the impending promise of Nikolai’s introduction in the second book, and honestly, it did not disappoint for a moment. If I rated this book solely based upon the scenes involving the Prince, it would have gotten 4-5 stars, easily. His banter is absolutely delightful, his facades are a whirlwind, and at his core, he is probably the single most interesting and good-hearted primary character this series has introduced thus far. I am beyond words over how excited I am now for his spinoff series.

“Oh, and the easiest way to make someone furious is to tell her to calm down.”
I didn’t know whether to laugh or throw my shoe at him.

I wouldn’t call what I’m about to say a spoiler, per se, but if you’re worried, you could skip this paragraph. I thought Shadow had a love triangle with Alina, Mal, and the Darkling, but quickly realized that, in this installment, the Darkling has no real weight on anything: Nikolai is the third side, and I spent every page begging for Alina to realize how fantastic he was. I’m certain that on at least four different occasions, though, I ranted to my friends, “Nikolai deserves better than her, anyways!”

The crisp edge of a winter wind. Bare branches. The smell of absence, the smell of night.

→ The Darkling ←
If there are antiheroes, are there such things as antivillains? If there are, I feel comfortably secure in the notion of putting dear Darkles on that list. I have seldom seen a villain that had such reasonable intentions, and honestly, maybe part of this is just my fangirling over how much I enjoy his character, but I can’t help but root for him a little bit. I know he does some really terrible things (like, really terrible), but I love every single scene involving him and genuinely wish we’d been able to spend a bit more time with him in Siege.

“Then I’d be alone, too,” he said, and he stayed the whole night through, till the lamps burned down to nothing.

→ final thoughts ←
I feel like I complained about more things than I complimented in this review, but at the end of the day, despite it being a fairly boring read, I did enjoy Siege and Storm enough to warrant finishing the series with Ruin and Rising. My distaste for Alina and Mal wasn’t quite strong enough to ruin my love of Nikolai or the Darkling, as well as how much I enjoyed some of the supporting cast, like the twins, Tamar and Tolya. There are enough redeeming qualities to make this series worth reading, but it’s not one that I strongly encourage others to pick up if they’re uncertain about it.

Over and Over Again — Cole McCade (ARC Review)

Dear Medusa (A Novel in Verse) by Olivia A. Cole

The United States of Cryptids: A Tour of American Myths and Monsters by J.W. Ocker

The Gathering Dark: An Anthology of Folk Horror by Tori Bovalino
Visit my shelf on Goodreads!

Weekly Check-in: I’m back on my audiobook flow! https://howlinglibraries.com/weekly-09292022/

We have another cover for you🚨

TELL ME I'M WORTHLESS by @hangsawoman is a vital work of trans fiction examining the devastating effects of trauma and how fascism makes us destroy ourselves and each other.

This is SUCH good news!! Congratulations, Eric! I can’t wait to read them!! 🥰🥹

I love Titan and I love these books with all my heart ❤️ I hope you will too!

EACH LIVING THING IS HERE TO SUFFER (novel) (September 2024)

And let’s not get into the nuance of how a selection process really works in libraries. I just need y’all to stop being Twitter librarians and share accurate information which should be coming from someone who works in collection development or acquisitions.