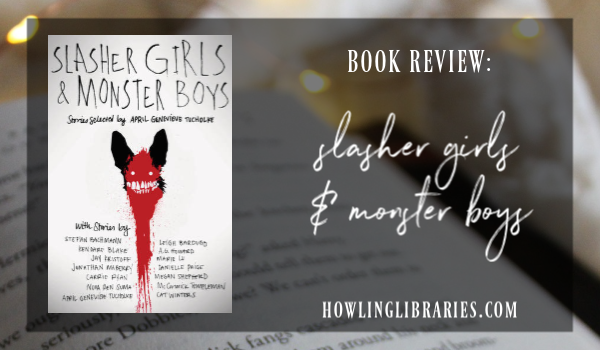 Since this is an anthology, I’ll be splitting the review up by story first, and then give my overall thoughts at the end!

☠️ THE BIRDS OF AZALEA STREET – Nova Ren Suma★★★☆☆
A group of teen girls observe mysterious incidents going on at their creepy neighbor’s house, and decide to investigate.
The prose was very lovely and gave way to some haunting imagery, but overall the story was pretty boring and unmemorable.

☠️ IN THE FOREST DARK AND DEEP – Carrie Ryan ★★★★★
An incredibly twisted Alice in Wonderland retelling about a girl whose mysterious “white rabbit” watches from the woods and commits horrible acts of violence.
Gruesome, creepy, and easily my favorite story of the collection.

☠️ EMMELINE – Cat Winters ★★★☆☆
A young girl hides away in the wreckage of her war-torn home and awaits unsuspecting soldier boys.
Like Nova’s story, it’s a tale with beautiful writing but lackluster events.

☠️ VERSE CHORUS VERSE – Leigh Bardugo ★★★☆☆
When a pop star comes back from treatment after a DUI and hitting a child, her mother notices that something is very different – and very wrong.
This was one of my most anticipated reads in the collection, because I tend to enjoy Leigh’s writing, and as usual, it was beautiful and descriptive, but I found myself tremendously bored and skimmed several bits of this one. I did love the ending’s creep factor, though.

☠️ HIDE-AND-SEEK – Megan Shepherd ★★★★☆
Some legends claim that, when death comes for you, you may challenge him to a game… and if you win, you keep your life.
I really loved the idea behind this story, and thought it was really fun – probably one of the most interesting plots of the collection, for me.

☠️ THE DARK, SCARY PARTS AND ALL – Danielle Paige★☆☆☆☆
Everyone calls Marnie a “monster”, but when the popular boy in school falls for her, the students find out Marnie isn’t the one they should be afraid of.
I found this story to be fairly subpar and was rolling my eyes by the ending of it. It was too trope-y.

☠️ THE FLICKER, THE FINGERS, THE BEAT, THE SIGH – April Genevieve Tucholke ★☆☆☆☆
When a group of teens hit their classmate on the road and leave her for dead, they quickly learn to regret their indecency.
I’m always interested to reach the editor’s contribution in any given anthology, but in this case, it was my next-to-least favorite contribution. It’s essentially Carrie from the bullies’ POV, which just wasn’t a perspective I was interested in ever hearing.

☠️ FAT GIRL WITH A KNIFE – Jonathan Maberry ★★★★☆
It sucks to be the victim of bullying, but there’s a certain satisfaction that comes with turning the tables on your assailants when the world ends.
I cringed when I read the title of this story, but gave it a chance because my mom loved Maberry’s Rot and Ruin series. I actually was pleasantly surprised and found this to be one of the more fun stories in the collection.

☠️ SLEEPLESS – Jay Kristoff ★★★★★
You have to be careful with online relationships, because you never know who’s really on the other side of the screen.
This was another of my faves; Kristoff’s writing is always fun (though his idea of teen text-speak can be a little excessive at times). I loved the twists in this one.

☠️ M – Stefan Bachmann ★★★★☆
M may be blind, but when she walks into a murder scene, she learns she has other senses that may lead her to the killer – if she can get to him before he kills again.
I really enjoyed the idea behind this one, and loved it up until the ending, which fell short for me, hence my giving it 4 stars instead of 5. The writing was beautiful and very descriptive of how horrifying it would be, to be a blind woman stuck in a house with a murderer.

☠️ THE GIRL WITHOUT A FACE – Marie Lu ★★★★☆
The closet was locked from the inside – so how did the girl get in, and why won’t she stop following him?
I personally have a fear of spooky closets that I never outgrew, so the idea behind this one creeped me out a little. Unfortunately, the middle felt a bit slow and less than thrilling, but I loved the ending (and the twist).

☠️ A GIRL WHO DREAMED OF SNOW – McCormick Templeman ★☆☆☆☆
The shaman’s daughter hunts a cure. The brothers hunt the shaman’s daughter. Unknown to both, a more foreboding presence hunts them all…
If I were rating this as a story in a fantasy collection, I might have given it 3 stars, but this didn’t fit Slasher Girls AT ALL. I kept waiting for the “horror” aspect to kick in, but it was really just a weird fantasy story thrown in.

☠️ STITCHES – A.G. Howard ★★★★★
The good book says, “if your eye causes you to sin, cast it out,” and this abusive father is about to learn it the hard way.
I adored this story. It’s gruesome and gory and downright gross, and I enjoyed every moment of it. The ending is poignant and heavy, but still somehow optimistic.

☠️ ON THE I-5 – Kendare Blake ★★★★★
The I-5 truck route is no safe place for a pretty young girl, but what about a girl who feels a supernatural pull to these monsters – and their victims?
I loved the idea that this young girl could sniff out pedophiles and their victims, and take revenge for the poor girls left in dumpsters and forests. There were some tough parts to read, and the ending was predictable, but I thoroughly enjoyed this ending to the collection.

☠️ COLLECTION ★★★★☆
Averaged out, my rating for the collection altogether came to 3.4/5 stars, which I feel comfortable rounding up to a solid 4. While there were some definite misses, if you’re into YA horror, I still think this is an anthology worth picking up.