SYNOPSIS:
All sorcerers are evil. Elisabeth has known that as long as she has known anything. Raised as a foundling in one of Austermeer’s Great Libraries, Elisabeth has grown up among the tools of sorcery—magical grimoires that whisper on shelves and rattle beneath iron chains. If provoked, they transform into grotesque monsters of ink and leather. She hopes to become a warden, charged with protecting the kingdom from their power.

Then an act of sabotage releases the library’s most dangerous grimoire. Elisabeth’s desperate intervention implicates her in the crime, and she is torn from her home to face justice in the capital. With no one to turn to but her sworn enemy, the sorcerer Nathaniel Thorn, and his mysterious demonic servant, she finds herself entangled in a centuries-old conspiracy. Not only could the Great Libraries go up in flames, but the world along with them.

As her alliance with Nathaniel grows stronger, Elisabeth starts to question everything she’s been taught—about sorcerers, about the libraries she loves, even about herself. For Elisabeth has a power she has never guessed, and a future she could never have imagined.

She wasn’t a wielder of chains; she was a breaker of them. She was the library’s will made flesh. 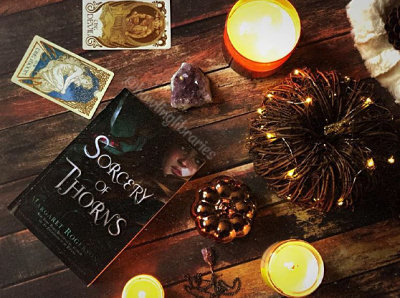 I never do this, but I’m going to give you all a TL;DR for this review, just in case you’re in a hurry and need me to get the point across quickly: This is one of the best books I have read in my entire life, and if there is any single book I could beg you to purchase this year, it is Sorcery of Thorns.

“Knowledge always has the potential to be dangerous. It is a more powerful weapon than any sword or spell.”

After adoring Margaret’s debut, An Enchantment of Ravens, it felt blaringly obvious that I would love this, too, but I had no idea how much my love for this world, this story, and these characters would blow Enchantment out of the water. The lore and world-building are so gorgeous and intricate, particularly surrounding the grimoires.

Books, too, had hearts, though they were not the same as people’s, and a book’s heart could be broken; she had seen it happen before. Grimoires that refused to open, their voices gone silent, or whose ink faded and bled across the pages like tears.

You see, you might know that this book is about books, and magic, and libraries, but what I loved most is that there are no simple books in Sorcery. Grimoires are living, feeling creatures, capable of good or bad, kindness or scorn, and most of all, of being corrupted. Elisabeth, having grown up in a library (literally), is more familiar than most with the grimoires, and her level of respect and adoration for them made me ache. As another adult who grew up with books as my closest friends, I loved how easily I related to her desperate need to be surrounded by books and to take care of them. (After all, it’s why I became a librarian, too!)

For these were not ordinary books the libraries kept. They were knowledge, given life. Wisdom, given voice.

Margaret’s care in crafting these grimoires is evident from the start, but as the story progresses, I was amazed at how important a piece of the story they became. I won’t spoil anything, but I will tell you that I have never in my life literally sobbed over a narrative about books in my life until this story.

“You belonged in the library, as much as any book.”

Of course, that’s enough about the grimoires, because the primary star of the show is Elisabeth, and hell, she deserves an entire review dedicated solely to what an incredible, hilarious, witty, kind, lovable character she is. She’s clumsy and awkward in all the best ways, and she genuinely leaps right off the page with her general realness. There’s a sub-plot line involving her and the development of PTSD that felt so honest and authentic, it broke my heart for her every time it reared its head and made me root that much harder for her successes and happiness.

“Are all librarians like you, or is it only the feral ones who have been raised by booklice?”

Sharing the spotlight is our love interest, the infamous, talented, handsome (and casually queer!) sorcerer Nathaniel, and his demon servant/companion Silas, either of whom I would happily protect at all costs because they are precious and not to be trifled with. Okay, Nathaniel could probably use a little trifling-with in his life, particularly because he responds with disarmingly hilarious nonchalance to every minor or major disaster Elisabeth drags him into. Silas, on the other hand… well, you’ll just have to meet him for yourself, but I don’t think anyone could not love his grouchy, quietly protective demonic self.

“It’s an honor to fight by your side, Elisabeth, for however long it lasts.”

Oh, and I can’t pass up the opportunity to mention the romance! It’s fairly slow-burning, and it forms in the most natural, beautiful way. I loved watching Elisabeth and Nathaniel grow to trust one another, become friends, and gradually recognize the fact that neither of them could fathom this adventure without the other. If you all could see the number of tabs I used just on Nathaniel’s sweet admissions of affection, wow. I might have also tabbed every single instance in which Nathaniel called Elisabeth “you absolute menace”, because if that didn’t sum up their relationship as a whole, I don’t know what could have. My heart is so full.

She felt as though she stood on a precipice, and that if she leaned forward, she would fall. She would fall, and drown with him; she would never resurface for air.

Beyond all of this, the plot in this story is so engaging and suspenseful! I’d been reading Sorcery as slowly as I could stand to, because I knew I would be devastated when it ended, but once I hit the last hundred pages or so, I couldn’t be interrupted for anything because I simply had to know what happened next—and reader, let me tell you, not a single word in this story disappointed me. For every expectation I had of this book, Margaret surpassed it by a country mile.

“Of course you can stay, you menace. It isn’t as though I could stop you even if I wanted to. And fine, I’ll help you. Not for any noble reason. I still think it’s a lost cause. We’re probably going to get ourselves killed. But every man has his limits. If there’s one thing I can’t do, it’s stand by and watch you demolish irreplaceable antiques.”

As you can see, from the fact that I’m forcing myself now to refrain from writing another entire page to this review about all of the things I adored in Sorcery of Thorns, I cannot recommend this book highly enough. It is easily my favorite read of 2019, and one of my favorite reads of all time. It touched my heart in a million places and a million ways I could never have predicted and will never fully recover from, frankly. I can’t wait to reread it over and over again, and more than that, I can’t wait to see what Margaret writes next. 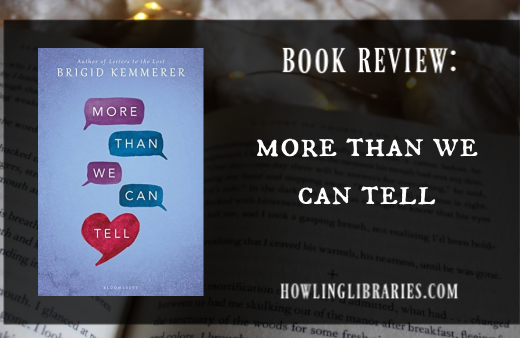 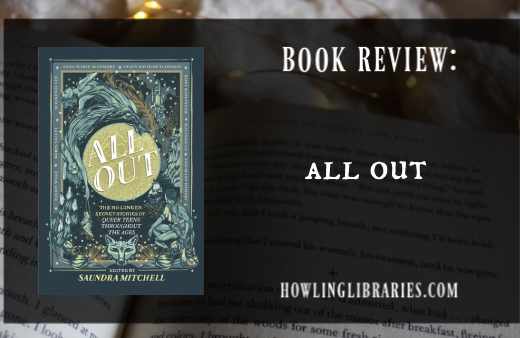 All Out — Saundra Mitchell (ARC/Anthology Review)