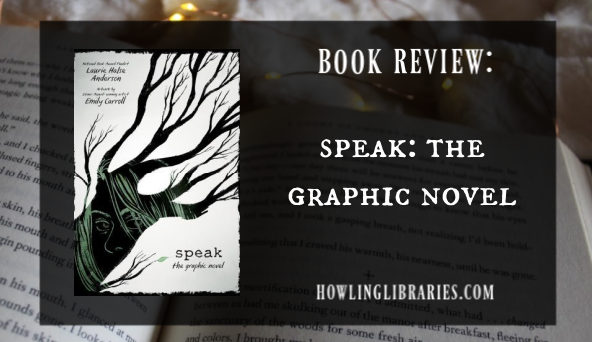 TITLE: Speak: The Graphic Novel
AUTHOR: Laurie Halse Anderson; Emily Carroll
RELEASED: February 6th, 2018; Farrar, Straus and Giroux
GENRE: Contemporary
AGE RANGE: YA
SYNOPSIS: “Speak up for yourself-we want to know what you have to say.”
From the first moment of her freshman year at Merryweather High, Melinda knows this is a big fat lie, part of the nonsense of high school. She is friendless–an outcast–because she busted an end-of-summer party by calling the cops, so now nobody will talk to her, let alone listen to her. Through her work on an art project, she is finally able to face what really happened that night: She was raped by an upperclassman, a guy who still attends Merryweather and is still a threat to her.
With powerful illustrations by Emily Carroll, Speak: The Graphic Novel comes alive for new audiences and fans of the classic novel.

“When people don’t express themselves, they die one piece at a time.”

I first picked up a copy of Speak at the library some time in the very early 2000s, when I wish I’d been too young to know how the world worked, the ways in which it chewed children up and spat them back out. Sadly, I was one of many children who learned these things early, and Speak made me feel acknowledged. I remember thinking, for the first time, that someone understood me, and I will never, ever let go of the special place that feeling carved out in my heart for this famous little story. When I found out that one of my favorite graphic novel artists was taking it on for a new spin, I had to have it, and I literally sat down to devour it the moment I opened the package.

“I wonder how long it would take for anyone to notice if I just stopped talking.”

Unfortunately, Laurie Halse Anderson speaks from a place of understanding and experience on this topic, but it shines through in how authentic the events of Speak feel. The story not only discusses the ramifications of rape and how Melinda views her attacker now – especially in a scenario when a victim is forced to continue interacting with their abuser – but it also touches on the depression that can come along with the event, and the ways those feelings manifest themselves for many victims: isolation, silence, anger, self-harm, anxiety, intrusive thoughts, and apathy for anything in life that isn’t crucial to survival.

“I have never heard a more eloquent silence.”

While the story itself is as wonderful and haunting as it always has been, Emily Carroll’s artwork genuinely takes things to a new level. She manages to depict small things that don’t come across as so important in the text – like Melinda’s nervous tics, or the way she views herself as an endangered rabbit when the vicious wolf (her attacker) is near. When it comes to the heaviest and darkest scenes, Emily manages to convey the hurt and fear without going overboard on graphic depictions. There is one panel, in fact, that is so subtle, but left me breathless because it so perfectly portrays the helpless claustrophobia that comes with facing one’s attacker.

“It happened. There is no avoiding it, no forgetting. No running away, or flying, or burying, or hiding.”

I could tell you, for those of you who haven’t experienced Speak before, that there’s a silver lining, or a lightly humorous subplot to cut through the grime, or a perfectly happy ending, but none of that would be true. Laurie Halse Anderson is too authentic for that. This isn’t a story about a girl who happens to have been raped; this is a book about rape, and the tragic things it can do to a survivor’s psyche. I recommend the utmost caution when proceeding with this story, in its original format or this new graphic novel style, but I also have to say that I cannot recommend this book highly enough.

I don't read much horror but if you need recs then Destiny is your go to person 🖤 #bookrecommendations https://twitter.com/howlinglibrary/status/1292519233176436736