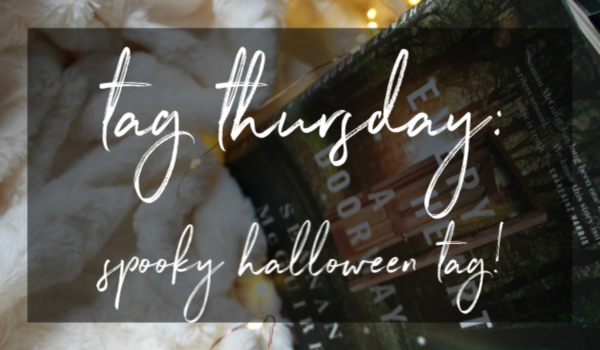 I grabbed this tag from Life of a Female Bibliophile!

Can I go with the entire Silver Scream album by Ice Nine Kills? ? If I had to narrow it down to just one track… probably ‘The Jig is Up’.

2. Name something you wouldn’t want to run into in a dark forest or in an abandoned building.

The Rake. If you’re an oldschool creepypasta lover, you’ll probably know what this is; if you don’t know, well… don’t blame me for your nightmares if you Google it.

3. Have you ever played with a Ouija Board?

Nope. I’m not 100% opposed to it, but I’m not super interested, either. I just personally prefer communing with spirits through candle work or pendulums.

Definitely John “Jigsaw” Kramer from the Saw franchise. What a sordid and tragic origin, what a twisted villain-with-“good”-intentions backdrop, and Tobin Bell’s delivery is FLAWLESS.

5. The creepiest thing that’s ever happened while you were alone?

Oh, man, where do I start? I’ve actually had a lot of weird and creepy experiences, but most of them occurred while other people were present! If I’m only going with stuff while I was totally alone, here we go: I was once woken up by a really deep (like, bizarrely deep) masculine voice booming right in my ear, “Wake up!” I was home alone and woke up and smelled smoke, and ran to the kitchen where I learned I’d left an empty pot on a hot eye on accident and it was just starting to catch fire. While that was a pretty good outcome (thanks, disembodied voice!), it was still so strange and a little terrifying to hear this crystal clear, unrecognizable voice right in my ear.

6. If you were dared to spend the night in a “haunted house”, would you do it?

It would depend on my personal feelings about the house. I have a strong intuition and sense of “spirit empathy” (which, if you’re not familiar, basically helps you recognize an entity or spirit’s intentions/mood/etc.), so if I felt safe, sure.

Yeah, a bit! For example, if I or anyone around me says anything that feels like a possible “jinx”, I HAVE to find something to knock on three times. (I do most things in 3s whenever possible, too.)

8. Do you ever see figures in your peripheral vision?

Pretty often. I always have. ?

9. Which urban legend scares you the most?

Are we counting creepypasta as urban legends? If so, it’s still The Rake. ? If not… probably Bloody Mary, honestly! I’ve never been willing to say it in a mirror or anything.

10. Do you prefer gore or thrillers?

Gore, for sure. I usually guess the ending of thrillers loooong before it’s revealed (too many years of watching CSI, maybe lmao) so it tends to spoil my enjoyment of a lot of them.

11. Do you believe in multiple dimensions or worlds?

I do. I don’t think anyone knows fully how they work or to what extent they go, but it’s hard for me to imagine this being the only one.

Yeah… nothing to write home about, though.

14. Have you ever played Bloody Mary?

Ha! I didn’t see this question before writing my answer to #9. Nope!

15. Do you believe in demons/the devil?

Eh… I believe in malevolent entities, but I’m not sure if I view them the same way you’d view demons or the devil?

16. You’re home alone but you hear footsteps in your house, what do you do?

Where am I in the house, and where are the footsteps? I keep flip-flops, my keys, and my wallet right beside the door, so if I’m closer to the door than the footsteps are, you’d better believe my ass is running out to the car and driving down the road while calling the cops. ? But if they’re between me and the door… I guess I’d lock myself in my bedroom, since it’s the only room with a lock-able door that has a window I could safely jump out of.

17. If you got trapped in one scary movie, which would you choose?

Ooooh… that’s tough. Can I pick Tucker and Dale Vs. Evil? I know it’s technically a horror comedy, but I like to think I wouldn’t be stupid enough to suffer any terrible fates there and I could just befriend Tucker and Dale. ?

18. If you could only wear one Halloween costume for the rest of your life, what would you be?

19. Would you ever go to a graveyard at night?

I have many times and I’m sure I will again!

20. In a zombie apocalypse what is your weapon of choice?

If I could somehow magically have unlimited ammo, definitely a handgun — something small that held a lot of ammo, preferably — because ya girl does not want to get up-close-and-personal enough to use a knife, sword, machete, cricket bat, etc.

21. Would you rather go to a Halloween party or go trick or treating?

Trick or treating for my son’s sake, Halloween party if it’s just for me.

22. You’re in a horror movie. Are you the final girl, the first to die, the comic relief, the skeptic, the smart one, or the killer?

Oh, man. I doubt I’m in good enough shape to be the final girl unless I can outsmart the killer. ??? Buuuut I’d make for decent comic relief or “the smart one”.

One of my spouse’s and mine’s running jokes is a reference to when we first got together: I asked them what I would be in a horror movie, expecting them to say the final girl or something equally flattering (lmao — you know how new relationships are), and without missing a beat, they said, “Oh, definitely the killer.” ?

23. Do you have to watch something happy after watching a horror movie so you can go to sleep?

Nope! The last time I couldn’t sleep right after a horror film was when I saw Paranormal Activity in theatres for my 17th birthday, all the way back in ’09.

I definitely yell at the characters, for better or for worse. ?

^ literally me, all the time.

I do the scaring! I’m notoriously hard to sneak up on.

The Siren and the Specter by Jonathan Janz. First book to ever give me a legitimate “jump scare” moment.

27. How old were you when you saw your first horror movie?

28. What was your first Halloween costume?

I think my parents dressed me up as a puppy for my first Halloween?

29. What are you going to be for Halloween this year?

Sadly, I didn’t end up really dressing up. I planned all year to be the bride of Frankenstein (because it’s one of the only “classic” costumes I’ve never done any variation of!), but my mental health messed me up for the last few months and didn’t give me any peace until it was too late for me to throw together the outfit. *sigh*

30. If you could have a spooky Halloween pet (black cat, owl, bat, rat, wolf), what would you pick?

I would just about die if someone gave me a cute little pet Black Flying Fox. ♥

How does anyone not love this face?!

Since it’s Halloween right now, it’s a little late for me to tag anyone, so if you want to do this tag, be my guest! ?