This week’s prompt was actually to list 10 of the best character names, but I had a hard time narrowing it down, so I went with 10 names that I think are noteworthy for being difficult to pronounce, a bit strange, or even just because people tend to pronounce them so differently (like the first one on this list, which I feel like people are VERY divided on)!

I used to think I could just check the audiobooks for pronunciations, until I learned that there are many authors who say their narrators don’t pronounce the characters’ names correctly! 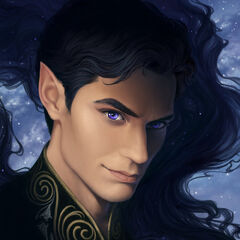 1. Rhysand
I know a lot of people will feel me on this one! I thought it was Reese-and from the beginning, but then I kept hearing booktubers say “Rice-and” and it really made me doubt myself! I was relieved when I learned my original pronunciation was how the author says it.
Book/Series: A Court of Thorns and Roses series

2. Rhy Maresh
I read A Darker Shade of Magic after reading the first 2 Court books, and I guess I subconsciously associated the names, because I was saying “Ree” for months before I learned it’s “Rye” (rhymes with “why”)!
Book/Series: Shades of Magic series

3. Laurent of Vere
I’m still a little bit uncertain on this one. Is it like Lauren, but with a “t” at the end, or is it the French pronunciation? (I think the latter!)
Book/Series: Captive Prince trilogy

4. Zélie Adebola
Is it “Zell-ee” or “Zee-lee”?
Book/Series: Legacy of Orïsha series

5. Tarquin
I’m torn on this one: “Tar-kin” or “Tar-kwin”? I always say the first one, but some of my friends say the latter because of the “qui” (like quit, quick, etc).
Book/Series: A Court of Thorns and Roses series

6. Matthias Helvar
I’ve known several people named Matthias in my life, and several of them pronounced it differently, so I’m torn between “Math-ee-us” or “Math-eye-us” (how I usually pronounce it).
Book/Series: Six of Crows series

8. Circe
I have always pronounced it “Sir-say”, but lately I’m hearing a lot of people say “Sir-see” or “Sirs” – popular opinion on this one?
Book/Series: Circe

9. Nomeolvides
This is technically the surname of the women in Wild Beauty, but this is one that I struggle a lot with (partially due to fear of butchering it).
Book/Series: Wild Beauty

10. …?
Okay, I lied. This is more of a Top Nine Tuesday, because I actually couldn’t think of any more names for this one!

How do you pronounce these characters’ names?

Book Lovers by Emily Henry
Visit my shelf on Goodreads!