This is a weekly tag hosted by The Broke and the Bookish, and this week’s challenge is a father’s day freebie! You can pick 10 of anything father-related. I decided to go with 10 Worst Bookish Dads!

When I sat down to start this blog post, I decided I wanted to do something fun, and I realized that there are some good book dads… but there are tons of bad ones! I don’t mean well-intentioned, clueless fathers; I mean downright evil. Happy Father’s Day, evil dads! What would the literature world be without you?

1. Tywin Lannister – A Song of Ice and Fire series

From the start, Tywin is just disregarded as a total dirtbag. He’s brilliant, conniving, bold, and power-hungry, but what makes him relevant to this list is the way he treats his children; specifically, Tyrion, who Tywin has hated from birth due to his physical differences as well as Tywin’s wife having died during Tyrion’s birthing process. Tywin does horrible things to Tyrion constantly throughout the series and never seems to show a moment’s remorse for his actions.

There isn’t much I can say about this one without spoiling the entire book, and since it’s a brand new release, I’d be basically the worst book blogger ever if I did that to you guys (especially since the book is AMAZING and you absolutely must pick it up right away!). All I’ll say is that things aren’t what they seem with Tilla’s father, and he’s kind of… no, actually, he’s totally a jackass.

3. Keir – A Court of Thorns and Roses series

Keir is Morrigan’s father, and we find out in A Court of Mist and Fury that he was horrible, even by ACOTAR-father-standards (I mean, there were lots of bad High Fae dads in those back stories!). Not only did he try to sell Morrigan off to the highest bidder, essentially, but he then went on to beat the hell out of her and nail a note to her stomach telling the Autumn Court to “deal with her”. It’s no wonder that Morrigan hates her family!

Technically, Gabe is Percy’s step-dad, but for all intents and purposes, I felt like he belonged on this week’s list. He’s a total jerk to Percy, whether it’s yelling at him, insulting him, or stealing his money to gamble away (and lose). He sees Percy as a pest and a hindrance, and is even horrible to Percy’s mother. When Percy finds out at the end of The Lightning Thief that Gabe has been abusing his mom, it’s the final nail in Gabe’s theoretical coffin.

He’s an abusive, power-hungry, menacing jerk. While he’s not the most “evil” of the fathers I’ve highlighted in this list, I definitely hated him enough to throw him in the mix.

If you’ve read this book, you probably already know exactly why Mr. Finch’s abusive and neglectful tendencies were bad enough to land him on this list. Something horrible happens in All the Bright Places, and while I won’t spoil it for you, I will tell you that Theodore Finch’s father is, in my opinion, pretty solidly responsible for the events that take place.

I mean, the whole premise of the book is that this young woman decides to go spend a summer with her estranged, deadbeat father, and he leaves her to fend entirely for herself while encouraging her to do drugs, drink, and hook up with the disastrous boy next door. He may not be evil, but his neglect contributed directly to the complete and utter downfall of this girl’s life, so I’m pretty sure he belongs her.

Yet again, Ellen Hopkins has a knack for writing horrible father figures, and this may be the worst out of all of the books of hers I’ve read. I remember first reading Identical as a teen and being completely stunned and mortified when I realized what was going on to wreck these poor girls’ lives. It still makes my heart hurt when I think back on it.

I will be the first to admit that, just because a character is “evil”, doesn’t mean they aren’t worthy of being enjoyed. Lucius is the perfect example – or maybe my little fangirl heart just hasn’t quite given up on him yet, despite the fact that he’s honestly a pretty awful human being and an even worse father. Poor Draco. </3

10. Denethor – Lord of the Rings series

I’ll be honest and admit I haven’t read the trilogy, so if the movies are totally different, I apologize, but I couldn’t leave Denethor out of this list because he’s just awful. I mean, Faramir tries so hard to please him, but all he wants is his dead son, Boromir, and the whole “let’s just burn the kid on the pyre” ordeal… Sigh. No.

Are there any horrible bookish dads that I missed? Let me know in the comments, and feel free to drop a link to your Top Ten Tuesday post as well! 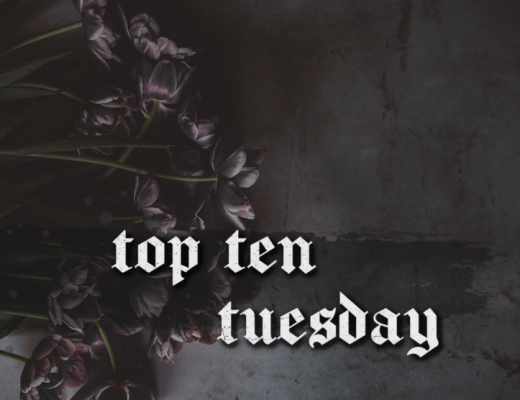