T10T: My Favorite Summer Reads as a Teen

This week’s prompt was Books to Read by the Pool/at the Beach, but I decided to give it a nostalgic twist. I’m 25 now, so these are going to be 10 of the summer-y reads that I loved about a decade ago! 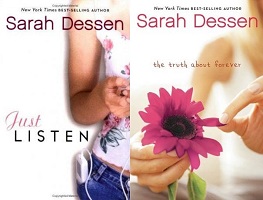 1. Just Listen & The Truth About Forever — Sarah Dessen
I couldn’t choose just one of these, but they were my favorite Sarah Dessen titles, and even now, I think Sarah’s books are perfect summer reads.

2. The Only Alien on the Planet — Kristen D. Randle
I know, I never shut up about this one, but seriously, this book has been a crucial component of my reading tastes for such a long time. It doesn’t take place in the summer or anything, but it’s a quick read (240pg), and I remember rereading it every summer.

3. The Perks of Being a Wallflower — Stephen Chbosky
Another book that isn’t inherently summery, but I reread it every year.

4. Eragon — Christopher Paolini
Technically, I reread this all year long, all the time, but I had to include it because I first read it right after its release, which was in June of 2002, and I distinctly remember staying up all night on my grandmother’s screened-in porch, listening to the frogs and crickets in the woods behind her house, and I transport back there every time I think about that memory.

5. Twilight — Stephenie Meyer
I mean… how many of us who are now in our 20s and 30s didn’t read and/or reread this during our summer vacations?

6. The Golden Compass — Philip Pullman
This is actually such a winter aesthetic book that I feel a little bit guilty including it, but the first time I read it was in the summer, and… okay, let’s be honest, half of this list is just waxing nostalgic over the books I reread a lot in my teens.

8. Harry Potter — J.K. Rowling
I know, in my soul, that if we all did this exact prompt, at least 85-90% of us would put this series on our teen summer reading list. 😛

9. The Nature of Jade — Deb Caletti
This book was one of the first that I ever saw anxiety rep in, and it was before I even fully understood how my own anxiety worked – I just knew that something about this book resonated with something deep inside of me, and that made me love it so much. (Plus, the love interest lives in a houseboat, so… summer vibes?)

10. Sharing Sam — Katherine Applegate
This one takes place in a beach town and a lot of the story revolves around the beach and being in Florida, so it’s a perfect summer read, but it’s also hella short (160pg) and packs a punch, which makes it a fantastic poolside read. Just, uh… bring tissues.

What were some of your favorite summer reads as a teen
(or now, if you’re still a teen)?