This is a weekly tag hosted by The Broke and the Bookish, and this week’s challenge is a Halloween freebie! I opted to name ten of my favorite books that I deem Actually At Least a Little Bit Creepy for you guys. Click the covers for each book’s goodreads link!

1. I’ve read many of Koontz’s titles, and while they’re usually enjoyable, they rarely spook me. Phantoms, however, came from an era in which Dean hadn’t yet renounced the title of “horror author”, and in fairly recent things I’ve seen from him, he’s said that he still considers this his scariest book. It follows a handful of people who are finding mysterious, swollen, dead bodies in their town, and what first looks like an illness turns out to be something much more malevolent.

2. Heart-Shaped Box was the first Joe Hill book I picked up, years ago, and it impacted me so profoundly that it began an immediate obsession with Joe’s writing and placed him solidly on my auto-buy list. It’s a ghost story about a rock star who’s obsessed with macabre items, and bites off way more than he can chew when he decides to buy a ghost online.

3. I’ve met a few rare souls who disliked Through the Woods, and almost all of them gave me the same reason: it wasn’t scary enough. The thing is, though, I strongly believe there’s a big difference between “scary” and “creepy”; one of these keeps us up at night, while the other unsettles us and, when executed well, makes us view the world a little differently. Through the Woods, a stunning graphic novel anthology, is not scary, but it is surely creepy.

4. Bentley Little is the author I tend to reach for when I’m looking for horror that is bizarre, gross, and sometimes disgustingly perturbing. The Association was the first title of his that I read, and let me tell you, it meets all of the aforementioned criteria. It follows a family’s struggles after moving into a new neighborhood where the HOA is seriously overbearing – to the point of mortal danger. I can safely say that I will be very careful to read any HOA agreements in my future moves, thanks to this book.

5. If you’ve ever asked me for horror anthology recommendations, more than likely, I recommended C.K. Walker’s books to you. She’s an indie author and her books need some serious polishing as far as grammar and spelling go, but she’s considered the Queen of r/nosleep, and her stories have rattled me on more than one late night. If you have Kindle Unlimited, a few of her collections are free there; if not, you can typically grab ebooks of them for $3 (though I do love my cute little paperbacks of the series).

6. If you ever find out that I’ve resubscribed to Kindle Unlimited despite the ridiculous number of unread books I already own, it’s usually just because I’m going through Darcy Coates withdrawals. She’s an Australian author who pumps out titles like there’s no tomorrow (I think Goodreads says she already has 36 distinct works?), and I’ve enjoyed everything I’ve read from her so far, but her short stories are my favorite work she’s done.

7. Sorry, but I couldn’t mention Darcy Coates without also mentioning my favorite of her full-length novels: Ghost Camera. It tells the story of a young woman who’s acquired a camera that shows a ghostly apparition in photos of her, and in each consecutive snapshot, the ghost is a bit closer. I have this weird thing about ghostly photos, so this one really creeped me out!

8. I actually just read Mary: The Summoning this past weekend, and while it was definitely imperfect (review coming soon!), as someone who has held a lifelong fear of mirrors and the idea that they could house other, not quite living entities… Well, I’ll be honest: I’ve spent the past two days double-checking the mirror every time I go to the bathroom.

9. Slasher Girls is a collection of short stories, and honestly, quite a few of them aren’t worth your time at all (you can read my review here to see which ones I’m referring to), but there is one story in particular that I’m choosing this title for: In the Forest Dark and Deep, a very twisted and gruesome Alice in Wonderland retelling that had every hair on end as I read it… late at night… alone… in my dark house, surrounded by woods…

10. Thirteen Chairs is another horror anthology, and realistically, it’s the mildest collection on this list, but I thought I’d add something for my friends who aren’t into being kept up all night. It’s a collection of ghost stories, and while they’re pretty chill, they’re not boring by any means.

What book has scared you the most? If you can’t pick just one, feel free to name a few for me! 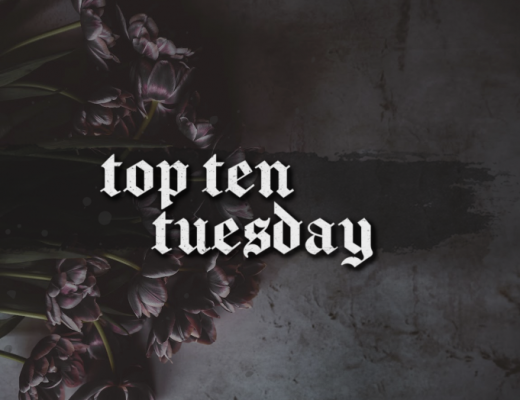