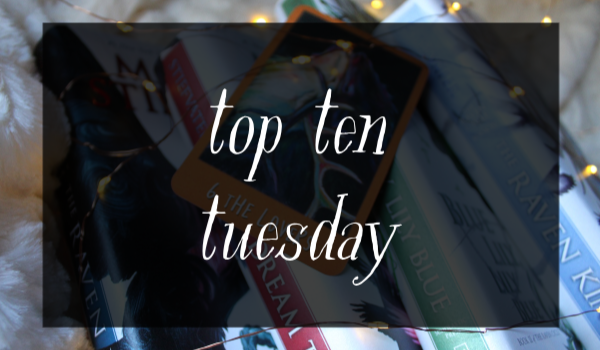 This is a weekly tag hosted by The Broke and the Bookish, and this week’s challenge is Top Ten Favorite Books of 2017. I’m going to have a full “top of 2017” post coming up at the end of the month, so I decided, instead, to give a list of my top 10 favorite contemporary releases of the year!

These will, obviously, ONLY be books released/releasing between Jan 1, 2017 and Dec 31, 2017. I’ll also mention the rep in the diverse titles, since most of these are. I’ll also add links to reviews!

These are in NO particular order!

1. The Hate U Give – Angie Thomas – February 2017
Starr Carter watches her best friend die at the hands of a police officer, and only she knows the truth about the travesty at hand. I haven’t even finished this book yet, and I know that this #BlackLivesMatter-inspired story about racism deserves to be on this list.
(POC: black, own-voice) RTC

2. The Roanoke Girls – Amy Engel – March 2017
This is techically a thriller/contemporary, but I really loved it. A woman is forced to return to her family home to search for her missing cousin, with a narrative that switches timelines between her adulthood and teen years as she pieces together a tragedy.
REVIEW HERE

3. Dear Martin – Nic Stone – October 2017
Justyce starts writing letters to the late Dr. Martin Luther King, JR. as he grows up in a world filled with racism and police brutality. This book was so important! I absolutely loved it and it broke my heart.
(POC: black, own-voice) REVIEW HERE

4. Now is Everything – Amy Giles – November 2017
We meet a girl who’s become the sole survivor of a plane crash involving her family, that alternates between “before” and “now”, highlighting the abuse that went on in her household. Breathtakingly sad and beautiful.
REVIEW HERE

5. Starfish – Akemi Dawn Bowman –  September 2017
TA biracial Japanese-American girl is just trying to make her way through the world as an artist, all the while combating the racism her mother pushes on her everyday for not looking “white enough”. Another heartbreaker, but it’s so good.
(POC: Japanese, biracial, own-voice) REVIEW HERE

6. How to Make a Wish – Ashley Herring Blake – May 2017
A young bisexual girl learning how to prioritize her own health and well-being after a lifetime of focusing instead on taking care of her abusive, alcoholic mother, while also exploring her love of music and the beautiful black girl who’s just moved to town. Absolutely stunning, fun, heavy, sweet, and everything I wanted it to be.
(POC: black, bisexual, lesbian, own-voice for bisexuality) REVIEW HERE

7. Aftercare Instructions – Bonnie Pipkin – June 2017
A young woman has to learn how to face life after an unexpected breakup and a necessary abortion. It alternates between standard narratives and play scenes, and is a quick, impactful read.
REVIEW HERE

8. What I Lost – Alexandra Ballard – June 2017
A girl is forced into in-house treatment for her eating disorder, where she must learn to love herself, let others in, and figure out who’s sending her all of those mysterious care packages.
(mental health, eating disorders) REVIEW HERE

9. There’s Someone Inside Your House – Stephanie Perkins – September 2017
I know this one is a horror/contemporary, but it read more “contemporary” than “horror” to me. A teen named Makani gets swept up into a real-life version of a slasher film when her classmates start dropping left and right.
(POC: black & hawaiian, biracial, trans) REVIEW HERE

10. They Both Die at the End – Adam Silvera – September 2017
I hesitated to include this contemporary since it involves some fantastical/scifi elements, but I loved it too much to leave it out. In a world where people receive phone calls on the morning of their death day to warn them, Rufus and Mateo learn they share in their impending demise, and decide to make the most of their final day together. Positively soul-crushing, but I loved this story and these characters so much.
(POC: cuban & puerto rican, bisexual, gay, own-voice) REVIEW HERE

What was your top contemporary release of the year?