They Both Die at the End – Adam Silvera (ARC Review) 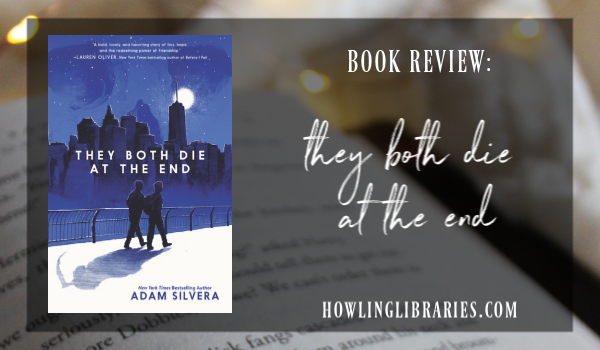 “Maybe it’s better to have gotten it right and been happy for one day instead of living a lifetime of wrongs.”

This was my first ever Adam Silvera book, and I’d been warned by so many people to prepare myself for ALL OF THE FEELS, but nobody could have really made me understand just how fast and hard I would fall in love with Adam’s writing voice. This book made him an auto-buy author literally by the 25% mark, and I don’t think any author has ever made my auto-buy list so fast in my life.

PLOT ➳➳
Imagine a world where someone has perfected the ability to predict when someone is going to die. Now, imagine that same world involving a call center whose staff’s entire purpose is to call each unlucky soul between midnight and 3am and to inform them that this is their End Day. Now, imagine that some kind soul has created an app, much like a dating service, that allows people to find someone to spend their End Day with so they don’t have to face it alone.

Mateo has spent his entire life living inside a bubble; meanwhile, Rufus’ bubble was burst when his entire family died right before his eyes. The two teens are vastly different, but when they find that they share an End Day, they decide to spend their final hours together, and show one another what living is all about.

THE BOYS ➳➳
Mateo is this adorable, precious little thing who is just terrified of the entire world around him and I just spent so much of the book feeling sorry for him because he is filled with such an immense amount of regret when he gets his phone call. He’s spent his short life too afraid to get out and live, and now that he’s got less than 24 hours until the end, it’s all he wants to do. He just broke my heart so many times.

Rufus, on the other hand, has gotten out and lived, but he’s got his skeletons, too. Despite his own fears and regrets, though, he’s solidly determined to make this last day of Mateo’s life meaningful, even though they only met today. He’s got a heart of absolute gold and I adored the chapters from his perspective. He’s got such a fun narrating voice, and the way he viewed Mateo as this pure, innocent soul gave me all the fuzzies!

THE FEELS ➳➳
I expected this book to wreck me, and it did, but not in the ways that I expected. I can’t say much, because the title spoils enough of the book, and this is one of those stories that you’re better off going into with as little information as possible. Let me just tell you to have a box of tissues on standby, and probably also some chocolate or ice cream or something, and maybe a puppy to hold if you can spare one?

FINAL VERDICT ➳➳
I had literally not a single complaint about this book. It is so rare that a story is a pure, unadulterated 5-star read for me, but this one achieved that. I would recommend anyone and everyone to pick up a copy of They Both Die at the End. Even if you don’t like YA contemporary, or don’t like sad stories… get this one. It’s absolutely worth your time.

Thank you so much to HarperTeen and Edelweiss for the ARC of this incredible book! All opinions expressed here are entirely my own.

Releases on Sep 5, 2017
Goodreads | Amazon | BookDepository
If you haven’t pre-ordered yet, please consider doing so via the BookDepository link – you won’t pay any extra, but I’ll get a small affiliate commission!

Pet by Akwaeke Emezi
Visit my shelf on Goodreads!

Captions have been added! ♥

I posted my June wrap-up! I didn't think this video would even happen, but I finally put down Sea of Thieves long enough to do some reading this week 🙈😂

I posted my June wrap-up! I didn't think this video would even happen, but I finally put down Sea of Thieves long enough to do some reading this week 🙈😂

I don’t read a ton of sci-fi, but the Illuminae Files trilogy definitely holds a special place in my heart as one of my all-time favorite series, and I'm itching for a reread right now. I miiiight have to make that… https://www.instagram.com/p/CCJXiUSAnrP/?igshid=fjed1tl131xf