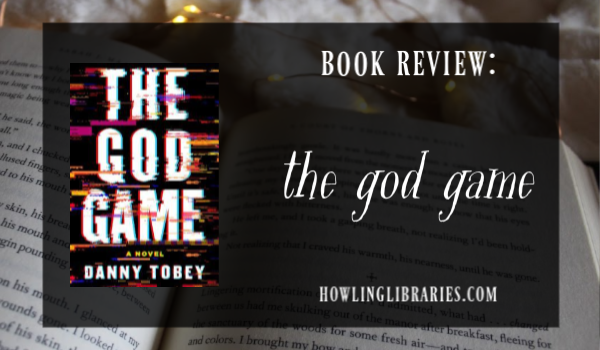 With those words, Charlie and his friends enter the G.O.D. Game, a video game run by underground hackers and controlled by a mysterious AI that believes it’s God. Through their phone-screens and high-tech glasses, the teens’ realities blur with a virtual world of creeping vines, smoldering torches, runes, glyphs, gods, and mythical creatures. When they accomplish a mission, the game rewards them with expensive tech, revenge on high-school tormentors, and cash flowing from ATMs. Slaying a hydra and drawing a bloody pentagram as payment to a Greek god seem harmless at first. Fun even.
But then the threatening messages start. Worship me. Obey me. Complete a mission, however cruel, or the game reveals their secrets and crushes their dreams. Tasks that seemed harmless at first take on deadly consequences. Mysterious packages show up at their homes. Shadowy figures start following them, appearing around corners, attacking them in parking garages. Who else is playing this game, and how far will they go to win?
And what of the game’s first promise: win, win big, lose, you die? Dying in a virtual world doesn’t really mean death in real life—does it?

It’s genuinely such a shame when a book that you anticipated so strongly lets you down, especially when the premise is this great! The plot alone had me thinking The God Game had to be at least halfway successful for me, and in the beginning of the book, I still held strongly to those convictions, but the further into this story I got, the lower I felt my rating dropping.

My first complaint is perhaps my fault (though I don’t think so, honestly): I was expecting a more immersive “game” than this. I went into this thinking these characters were going to be thrown into a legitimate game-esque world, and while they do see some things through augmented reality that aren’t solidly in the physical realm with them, for the most part, we’re left simply following around a bunch of teens as they receive ominous text messages. While I could certainly see how this would work for some readers as it makes it feel more like something that could actually happen, it felt lackluster to me and left me constantly wanting just a little bit more than I was given.

Secondly, in a book this high-risk, where characters are constantly being forced to do awful things and are placed in tough situations, it’s hard to feel the weight of those ultimatums when it’s impossible to root for anyone involved. The story primarily follows the Vindicators, a friend group of five teens brought together by their loves of coding and their general “outcast” vibes (aside from one, sort of). With these five, plus a slew of side characters we periodically get insight into, it quickly became “too much”; I don’t feel that the writing in this story was able to carry such a large cast, so it left everyone feeling a bit one-dimensional and bland. On top of that, you know going into the story that tough decisions will be made, but at their cores, each of these teens just feel so unlikable, whether it’s Charlie’s cruel interactions with his grieving father, or Alex’s sociopathic tendencies, or Peter’s conniving, arrogant attitude.

I also think it’s worth mentiong that, while I think the author wanted to do something positive by including a variety of characters (Kenny is black, Vanhi is Indian and a lesbian, and Alex is Asian-American), it’s not done well. Most notably, Alex’s entire family dynamic bothered me. We’ve all seen examples of the tired, outdated stereotype where Asian characters are held to higher standards by their parents: Alex’s father is horribly abusive and every ounce of it revolves around high expectations re: Alex’s grades, athleticism, etc. Every POV we’re given from Alex’s father highlights his background as an immigrant and refugee who “just wants better” for his kid — yeah, yeah, we get it. It feels like it’s beaten into the reader’s head that all of Alex’s father’s abusive tendencies come from a place of love, which is bullshit on so many levels, and frankly, the entire depiction of the abusive relationship in and of itself felt weird and unrealistic. There’s also some dreadful utilization of the “homophobic bully turns out to be a repressed gay kid” trope, and don’t get me wrong, I know that’s something that happens in the real world from time to time, but it felt like it was done for cheap shock value and, on top of everything else (and the unapologetic slur usage), I was so unsurprised and over it by the time it rolled around.

There’s also the writing to consider, which is the one thing I will say I felt bittersweet about: while I can’t say I thought it was very well-done, it was definitely quick-moving and action-packed enough to make the story go by quickly. If it hadn’t been for the fact that something is constantly happening and there’s no real filler material (which is admittedly an impressive feat for almost 500 pages), I probably wouldn’t have even finished it, but it was just engaging enough to keep me reading. Unfortunately, that didn’t pay off in the end, between the low overall rating I settled on and the fact that the ending went so thoroughly off the rails that I found myself skimming the last few chapters just to hurry up and be done with the whole thing.

When I started writing this review, I thought I would give The God Game 2 stars because despite all of this, I still think it was a cool premise at its core, but after getting my thoughts out in words, I’ve realized I really don’t have anything good to say about the execution here. I’m sure this book will be beloved by many readers but I am clearly not one of them and don’t believe I’ll be picking up anything else from this author in the future.

Thank you so much to St. Martin’s Press for providing me with this finished copy in exchange for an honest review!

Vanhi is Indian and lesbian, Kenny is black, Alex is Asian-American, a side character is gay

An incredibly disappointing, one-dimensional, and problematic execution of what could have been an amazing premise.
WOULD I RECOMMEND IT? Not at all.

The House by the Cemetery — John Everson

Normally I think of myself as somewhere between a 2 and a 4, but if I go into protective mode it's an easy 11. My mom has had a running joke since I was a child that, any time anyone has ever come for her, she only had to send me after them because I get vicious. 😬

Hey, friends! I'll be doing a talk on ✨ social influence ✨ and I'm trying to prove a point.

Thank you so much!

Hear me out on this...
Animal Crossing x Colourpop
That’s it that’s the tweet