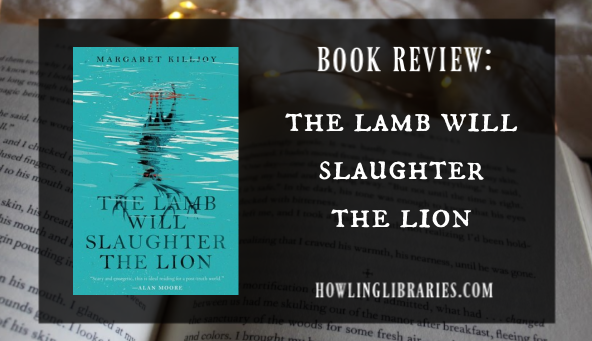 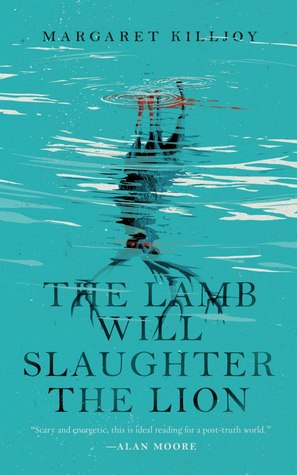 TITLE: The Lamb Will Slaughter the Lion
AUTHOR: Margaret Killjoy
SERIES: Danielle Cain, #1
RELEASED: August 15th, 2017; Tor.com
GENRE: Horror
AGE RANGE: Adult
SYNOPSIS: Danielle Cain is a queer punk rock traveller, jaded from a decade on the road. Searching for clues about her best friend’s mysterious and sudden suicide, she ventures to the squatter, utopian town of Freedom, Iowa. All is not well in Freedom, however: things went awry after the town’s residents summoned a protector spirit to serve as their judge and executioner.
Danielle shows up in time to witness the spirit—a blood-red, three-antlered deer—begin to turn on its summoners. Danielle and her new friends have to act fast if they’re going to save the town—or get out alive.

As a long-time horror fan, the biggest complaint I have had about the genre is how exclusive and problematic it can be. For a long time, it’s been really rare that you would find a horror book (or novella) that didn’t feature only white, straight characters—much less that you would find a story going out of its way to include a vast array of diverse characters and political commentary. When I heard that this series was a queer horror/fantasy storyline? I had to have it, and I was not disappointed in the slightest.

Danielle’s story works perfectly as a novella, because it drops you right into the action. As soon as she reaches Freedom, Iowa, she’s immediately caught up in a whirlwind of terror, magic, uncertainty, and death. Even though there’s a lot going on, Margaret Killjoy still manages to pack a tremendous amount of backstory and character development into these 112 pages. Danielle is a fantastic anarchistic punk character, complete with a complete disregard for the system, a striking sense of self-awareness, and absolute horror at the thought of ever settling down.

Simple as that, we walked out the door. No money, no accounting, no ration cards, nothing. Trust alone. I’d found a town that worked on trust alone.

Not only do we get to learn so much about these fantastic characters, but Freedom itself is seriously a complete utopia. Everyone is so accepting and caring of one another, and it honestly made my heart ache to think that I don’t know if I’ll ever see a world as open-minded and kind as Freedom, Iowa. There are people of all sexualities and gender identities, all races and ages, slim and thick, short and tall. There are queer people everywhere, and it’s so normalized that nobody feels forced to put a label on their own sexuality or explain who they are or why. One of the very first pieces of dialogue in the story is a character introducing themselves and immediately following it up with, “What are your pronouns?” It was so beautiful and varied and I loved every moment of it.

”So yeah, welcome to Freedom, Iowa. For the past year, we’ve had this benevolent, murderous spirit watching over us. Which is weird, but it’s gone fine.”

Of course, at its core, this is still a horror novella, and it does have some creepy settings and moments that ticked all of my aesthetical checkboxes. There’s a creepy, blood-red, three-antlered deer/demon named Uliksi, who runs with a horde of undead animals of varying species, each with open, empty ribcages. He literally kills people who usurp power over others or bring harm to others, and it helps to keep the town safe from would-be thieves, rapists, murderers, and more, as everyone is stricken by the fear of Uliksi’s judgment falling upon them. It sounds harsh, but as Danielle muses at one point, it gets the job done, and its benefits vastly outweigh its costs.

Finally, the last thing that I adored about this book was its stance on suicide. We learn quickly that Danielle’s mission is inspired by a hope of learning why her best friend killed himself, but there is never a single moment of suicide-shaming or mental health-related ableism. When another characters asks Danielle if she’s angry, her unhesitant response is that she’s not angry at her friend, just the world that brought him to that desperate state. While the story does not glorify the act of suicide at all, I think it’s so crucial that it offers this kind take on it: while it’s devastating for those left behind, it’s not an act performed out of malice or cowardice. It’s an act of desperation.

Because he’d decided Freedom was home, and he couldn’t come back. That’s what having a home will do to you. Maybe.

I genuinely cannot explain to you guys, as a queer horror fan, how much this novella’s existence and this author’s work means to me. It was so wonderful to finally see myself represented in a horror story that never vilified me and people like me, or any other marginalized groups. On top of that, the writing itself is just so enjoyable and fluid, the characters are lovable (especially Danielle’s found family, who offer fantastic banter and I hope to spend much more time with in future installments), and like I said, it’s so delightfully macabre in its aesthetic. I am so happy that I took the time to pick up this novella, and I cannot wait to read the sequel! 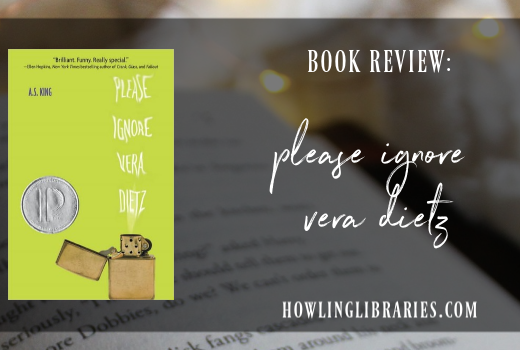