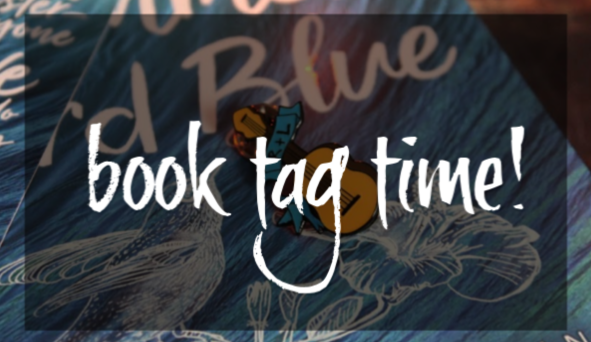 Thank you so much to Ellyn for tagging me in this amazing tag, and to May for creating it! ♥ They’re both such amazing creators and you’re absolutely missing out if you aren’t following them!

Probably Come Tumbling Down, though I have to say, I’ve been super lucky to read SO MANY good books this year?!

I had to think really hard on this one, but ultimately, I have to go with The Test by Sylvain Neuvel (review here). I just remember my jaw absolutely hitting the floor at points in this novella, and it was SO brilliantly plotted out.

I feel like I pick the same book every time I’m asked this, but I can’t help it: The Only Alien on the Planet. It’s just so good and SO lesser-known.

Credence. ?‍♀️ It sounded awful, but I kind of liked it.

A Court of Mist and Fury. I’ve read it so many times and somehow it always manages to comfort me. ♥

Let me go with a recent read for this one: You Should See Me in a Crown by Leah Johnson! The relationship between Liz and her brother is so precious, and I would read a whole book just about the two of them being adorable.

Really, the entire series, but in particular I thought of Obsidio. While it’s my least favorite in the series, I still remember being totally unable to pull myself away from it. I started it the evening of its release day and literally stayed up all night finishing it in one sitting because I was so invested!

The Flatshare! Even though it’s a pretty recent release still, it already has over 75,000 ratings on Goodreads with a 4.13 average, so I’d say it’s pretty well-loved. I absolutely adored it when I read it a few weeks ago and gave it 5 stars, easy.

Um… how long am I marooned for? I’m panicking a little just at the thought of only having ONE book to reread over and over. Can I just take my Kindle instead?! ?

The upcoming 6th Wayward Children book, Across the Green Grass Fields. I’ve adored every book in the series so far and I’m especially excited about this one because it features KELPIES! My little childhood fae-beast-loving heart is swooning.

The third book in the Brown Sisters trilogy by Talia Hibbert! The first two books were so good (I just posted a review for Take a Hint, Dani Brown that you can check out here if you missed it) and I’m just so ready for the third one!

My sweet babies… Captive Prince. I had NO interest in this series, but one of my best friends read it and loved it, so she convinced me to try it out, and I’m so glad she did!

I honestly don’t find books particularly funny very often? I don’t know if that’s weird, but I just… don’t really read comedic books. ? I guess I’ll go with Born a Crime by Trevor Noah; even though it’s very serious and heavy at times, he breaks it up with a lot of hilarious stories and commentary.

The Hunger Games – the entire trilogy, actually. I just never seem to get over how much this series means to me.

Definitely Crooked Kingdom because I knew something painful was going to happen, but I didn’t know what. And tbh, NO SPOILERS but… y’all seriously underestimated how much this book would wreck me, because I can’t count how many people told me the ending wasn’t that bad, and I know I view a certain character in this series very differently from a lot of people, because that event… yeah. It just about took me out lmao.

I hope the author doesn’t see this because I don’t want to bring up a painful reminder, but one of my most beloved horror books of 2018 was The Atrocities, which currently has a 3.16 average on Goodreads. I gave it 5 stars and adored it. ? I truly will never understand why this book wasn’t better received!

The Hazel Wood. Forever grumbling about that book and what a disappointment it was.

I looooove a good OTP, so I have a million answers for this (especially ACOMAF, because I’m Feysand trash for life, but I’m trying not to repeat answers here)! I’ll go with an OTP I adore that doesn’t get talked about enough: Gilene and Azarion from Phoenix Unbound. I just adore this precious slow-burn so, so much.

I’m in a hurry to post this because today’s post is running late, so I’ll just tag anyone who sees this and wants to join in on the fun!