I was tagged by Heather at The Sassy Book Geek, and this seemed like such a fun spring tag that I wanted to do it right away!

1. The struggle of getting started:

Definitely Name of the Wind by Patrick Rothfuss! I got this one as a birthday gift last October, and I know I’m gonna love it, but it intimidates the hell out of me for some reason! 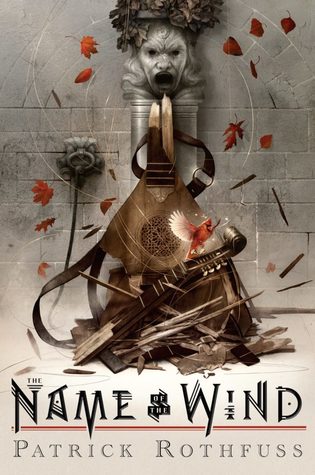 2. Cleaning out the closet:

a book or series you want to unhaul

I’m soooort of cheating, because I’m actually going to name some books I recently unhauled (as in, this past weekend): Goosebumps! I grew up on the series and loved the books as a kid, and wanted to pass them on to my son, too, but all of my copies were so old and tattered that, a few days ago, I finally decided to let them go and I’ll get new copies later on.

a book that was refreshing

This one is perfect for a very recent read of mine: Undead Girl Gang by Lily Anderson. I just read this last week, and I loved it so much. I’ll have a full review going up on May 2nd for a blog tour spot, but let me just say that it is hilarious, clever, and full of girls supporting girls and subverting tropes, and I loved it so much!

4. Washing out the sheets:

a scene you wish you could rewrite

I know I’ve mentioned this before on my blog, and if you’ve read the book, you might already know what I’m talking about, so no spoilers… but there’s a scene at the end of A Court of Wings and Ruin that I felt like ended a little too happily, to be honest, and I would’ve rewritten it just for more emotional “kick”. (No, it’s not about page 666!)

a book in a series you didn’t think was necessary

Definitely books 4 and 5 of Dean Koontz’s Frankenstein series. It was originally written as a trilogy, and I love the ending of book 3. The author himself went on the record saying that, if you liked how book 3 ended, you should not read books 4 and 5 because they took it in a totally different direction, and I wish I had listened, because I ended up DNFing book 4! Now I just pretend 4 & 5 don’t exist. 😉

a book that had a clean finish

I had to think about this one for a minute, but went with The Raven King. I would’ve been content to read 100-200 more pages, but let’s be real: the ending was exactly what it needed to be, and left me feeling satisfied and pleased with everything. ♥

7. Reaching to dust the fan:

a book that tried too hard to relay a certain message

I thought about this question for way too long before finally deciding to just shrug and leave it alone. I can think of books that tried too hard in general, but not for the purpose of relaying a certain message.

8. The tiring yet satisfying finish:

a series that was tiring but satisfying to get through

Okay, we all know that I’m horrible at finishing series, right? Like… awful. I have so many ongoing series right now that it isn’t even funny. It’s just sad. That said, I have to go with Harry Potter for this one. I was so sad by the end, and so sad to see it go, but so satisfied with the ending. (Until the epilogue. I hate the epilogue.)

It’s nearly 2am at the time that I’m writing this, and I’m tired, so… I’m going to be lazy and just let you guys tag yourselves in this one. 😉

The Spooky "Would You Rather" Tag