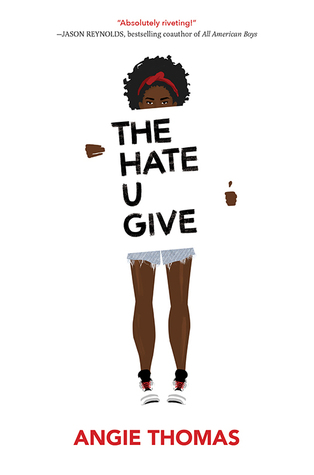 SYNOPSIS: Sixteen-year-old Starr Carter moves between two worlds: the poor neighborhood where she lives and the fancy suburban prep school she attends. The uneasy balance between these worlds is shattered when Starr witnesses the fatal shooting of her childhood best friend Khalil at the hands of a police officer. Khalil was unarmed.
Soon afterward, his death is a national headline. Some are calling him a thug, maybe even a drug dealer and a gangbanger. Protesters are taking to the streets in Khalil’s name. Some cops and the local drug lord try to intimidate Starr and her family. What everyone wants to know is: what really went down that night? And the only person alive who can answer that is Starr.
But what Starr does or does not say could upend her community. It could also endanger her life. 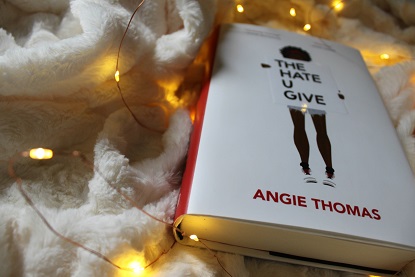 “Brave doesn’t mean you’re not scared. It means you go on even though you’re scared.”

→ Starr Carter ←
Starr, the teen girl telling the story, is one of the most lovable characters I have ever read in YA contemporary. Her narrative feels so genuine that, when she laughs, you laugh; when she cries, you cry. When she rages, you’re there, too. I adored her authenticity, from her slang to her geeky references and love for Harry Potter, from her obsession with sneakers to her terror of being outed as “a girl from the ghetto” to her ritzy, white classmates. The fears that come with her being a black teen in America are portrayed in a way that made me take everything I thought I knew about white privilege, and shove it over to the corner to make room for aaaaall the new wisdom Angie Thomas was offering.

Even in the lighter moments, though, Starr is incredible: she loves her family beyond measure, and her jokes with them are hilarious. The way she views her parents and their love for one another, as well as the immense respect and fondness she holds for them, was such a breath of fresh air in a genre that tends to be saturated with estranged familial relationships. I could read hundreds of pages of simple banter and sarcasm between Starr and her family.

“Funny how it works with white kids though. It’s dope to be black until it’s hard to be black.”

Something that I didn’t really expect to see, but loved, was Starr’s constant internal conflicts regarding how she should act at school. She struggles tremendously with the fear that, if she shows anger, or slips up and uses the “wrong” slang, or even mentions her hometown, her classmates will immediately label her as “a ghetto black girl” and treat her poorly. This was incredibly eye-opening for me; I’d thought about the fact before that many people of color feel that they have to “act white” around white people to be taken seriously, but I had never really let it sink in, nor had I looked at myself and wondered if I have made my own loved ones feel inadequate or like they have to play a charade. It broke my heart.

“That’s the hate they’re giving us, baby, a system designed against us. That’s Thug Life.”

→ Maverick Carter ←
No matter how much I love Starr, and so many of the other characters in this book, too, I can’t deny that the star of the whole damn show was Starr’s father, Big Mav. If he isn’t defending his family and his home with everything in him, he’s dropping incredible truth-bombs, or making everyone laugh (me included). He is the single greatest father portrayal I’ve ever seen in a book, ever. Ever. I have never loved a fictional dad as hard as I love Big Mav.

Not only is Big Mav ceaselessly there to support Starr and the rest of the Carter family, he’s just a really fucking good guy. He values his community despite its flaws, and wants desperately to raise up others and to help them pursue betters lives for themselves. As a former drug lord and gang leader, he knows the brutal side of gangs, but he also perfectly explains what systemic racism does to support the existence of gangs and drug dealing, as well as offering insight into the reasons people find themselves in predicaments they never thought they would be in, and why they should be helped, not judged and cast aside.

“Once upon a time there was a hazel-eyed boy with dimples. I called him Khalil. The world called him a thug.”

→ police brutality, racism, & #blacklivesmatter ←
There aren’t enough words that I could say, that would explain how badly I wish this book wasn’t so relevant to our time, but the timing could not have been better. According to The Guardian’s news reporting in 2016, young black men (ages 15-34) were nine times more likely to be killed by police than any other demographic of Americans. We’ve all heard the stories: a shocking number of these victims were unarmed, and many of them, like Starr’s friend Khalil, were accused of having weapons where there were none.

“A hairbrush is not a gun.”

Not only do we see the terrifying outcome of police brutality, we also get to see how important it is that the good cops (because of course they do exist, and this book doesn’t pretend they don’t) SPEAK UP about injustices, unnecessary force, violence, and racial profiling. We get to watch Starr’s uncle, who works as a detective, struggle with his own conflict between taking the side of his colleagues or taking the side of the teen who was shot dead in the street.

“To every kid in Georgetown and in all “the Gardens” of the world: your voices matter, your dreams matter, your lives matter. Be roses that grow in the concrete.”

→ final thoughts ←
I feel like there are a million more things I could say about this incredible book, and these wonderfully lovable characters, but we’d be here all day, and honestly, my voice isn’t one that needs to be lifted up right now. Please, if you haven’t picked this book up, read it. If you’re white like me, go into it with an open heart and try to learn from it. Angie has so much knowledge packed between these pages, if you’re willing to listen. And then, go out there and apply it.

NOTE: This entire review is coming from a white woman’s perspective. I can’t speak for other readers, and I certainly cannot speak for those whose struggles are nothing I’ve ever known, but what I can do is try my best to help boost voices of minority readers and reviewers. If you have an own-voice review for this book, feel free to send it my way and I will be more than happy to boost you as much as I can. ❤