* Top 5 Wednesday is a weekly meme/challenge for book bloggers, hosted by Lainey and Sam. The goal is for bloggers to choose their top 5 picks for the week’s given challenge, and you can find out more over on Goodreads! *

Why she’s unlikable:
Lada is downright cruel. She has little to no patience for any weakness whatsoever, out of anyone. She will stomp all over anyone who’s in the way of getting what she wants (which is leadership of Wallachia), and she is violent and venomous.

Why I like her:
I basically adore Lada for all of her flaws. I have never seen such a vicious female MC, and I live for every second of it. She displays traits that I think a lot of readers tend to praise in male MCs and criticize in female MCs, to be frank. I enjoy how logic-driven she is, and I get a sick little thrill every time she chooses her pursuit of the throne over more emotional affairs.

A dragon burned everything around herself until it was purified in ash.” 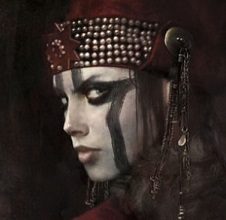 Why she’s unlikable:
I have met soooo many people who love these books, but absolutely hate Feyre’s character. Many people feel that she is whiny, pig-headed, unintelligent, and overall, hard to love.

Why I like her:
I find Feyre to be emotionally strong, enduring, and competent as hell from the beginning. While she did come off as a little bit overly stubborn at times, it never felt to me like it was beyond reason.

“I was not a pet, not a doll, not an animal.
I was a survivor, and I was strong.
I would not be weak, or helpless again
I would not, could not be broken. Tamed.”

Why he’s unlikable:
I mean, honestly… he’s whiny as hell, he doesn’t always treat his friends very well, he picks the literal worst life partner ever (Harry/Hermione FOR LIFE), and mostly, he’s whiny. Did I mention that he whines a lot?

Why I like him:
The kid grew up in an abusive household, found out he’s the chosen one, almost gets murdered on a yearly basis, loses every speck of family he’s got, and finds out that one of his favorite people in the world basically raised him like a lamb for slaughter. He deserves to whine a little.

“Every second he breathed, the smell of the grass, the cool air on his face, was so precious: To think that people had years and years, time to waste, so much time it dragged, and he was clinging to each second.”

4. Hazel Grace Lancaster – The Fault in Our Stars

Why she’s unlikable:
I have met more people who dislike Hazel than people who like her, so I’m just going to go off of what I’ve been told: she’s whiny, pretentious, overly metaphorical, and/or a Manic Pixie Dream Girl (except with a terminal illness).

Why I like her:
For a teen girl who’s been told she has limited days since she was a child, I find her to be incredibly un-whiny. I love her metaphors and self-awareness; I love how authentic the age of her soul feels, because suffering through cancer would undoubtedly age any child too soon. I love how fiercely she loves Gus and her parents, and how her priority is never her own life, but the pain she will leave her loved ones with when her life ends.

“Late in the winter of my seventeenth year, my mother decided I was depressed, presumably because I rarely left the house, spent quite a lot of time in bed, read the same book over and over, ate infrequently, and devoted quite a bit of my abundant free time to thinking about death.”

* DISCLAIMER: I am solely basing these opinions off of the first book. My GR group Forgotten YA Gems’ June BOTM was The Raven Boys, and there have been some divided opinions on Gansey’s mannerisms in the first book. *

Why he’s unlikable:
Complaints I have heard regarding Gansey: he’s obsessed to a fault, his mannerisms are reminiscent of a wealthy old man (“colleagues”, anyone?), and his status and wealth have divided him so far from the “real world” that it’s difficult for him to even carry on a conversation with people who belong to lower classes than him.

Why I like him:
He is incredibly privileged, but he’s also aware of that, and faces a lot of inner turmoil whenever he realizes he’s forgotten to check his privilege and has inadvertently offended someone (example: his first conversation with Blue). He does remind me of a rich old dude with the way he talks sometimes, but it’s oddly endearing. He loves his friends fiercely and wants to provide for them in the only ways he knows how. Plus, I love that he’d rather drive a beaten up old POS than one of the endless fancy vehicles his father offers him.

“He strode over to the ruined church. This, Blue had discovered, was how Gansey got places – striding. Walking was for ordinary people.”

Top 5 Wednesday: Outside of the Western World