SYNOPSIS:
Chaol Westfall has always defined himself by his unwavering loyalty, his strength, and his position as the Captain of the Guard. But all of that has changed since the glass castle shattered, since his men were slaughtered, since the King of Adarlan spared him from a killing blow, but left his body broken.

His only shot at recovery lies with the legendary healers of the Torre Cesme in Antica—the stronghold of the southern continent’s mighty empire. And with war looming over Dorian and Aelin back home, their survival might lie with Chaol and Nesryn convincing its rulers to ally with them.

But what they discover in Antica will change them both—and be more vital to saving Erilea than they could have imagined.

Despite the fact that this series has become one of my favorite series of all time (literally, it’s now tied with two other series for my #1 favorite spot), I was extremely apprehensive about picking up this installment! Not only is it so close to the end (just one book left!), but it takes place from Chaol’s perspective in the Southern Continent, and if you’ve read my reviews of the other books in this series, you know I’m not his biggest fan.

“You must enter where you fear to tread.” 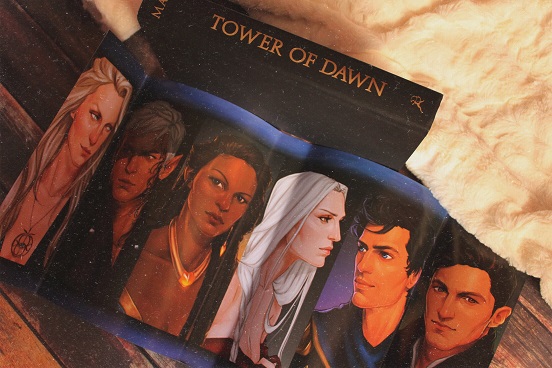 With that in mind, I’m not sure why I ever doubted Maas’ ability to entertain me, because no amount of dislike for Chaol could have kept me from still enjoying this book quite a bit. While Chaol is incredibly angsty and self-loathing through most of the book, and that aspect of his personality gets old quickly, he also grows so much as a character and comes to recognize his own flaws and mistakes in a way that makes it hard not to forgive him. He’s still not winning Character of the Year awards from me any time soon, but I definitely don’t hate him.

“Using the chair is not a punishment. It is not a prison. It never was. And I am as much of a man in that chair, or with that cane, as I am standing on my feet.”

There’s also a lot to be said for his disability rep. Chaol begins the book hating his wheelchair and himself, but he grows to accept his new disability and begins to realize that it’s going to hold him back from so much less than he thought it would. There are also a few discussions regarding how disabled individuals can feel like guinea pigs for physicians (healers), or how painful it is to be treated differently. I won’t promise this rep will work for every own-voice reader, but as someone who suffers from chronic pain and invisible disabilities, there were moments that actually made me cry because I felt so strongly understood by Chaol’s representation.

It was like waking up or being born or falling out of the sky. It was an answer and a song, and she could not think or feel fast enough.

The real shining stars in this book, though, are Nesryn and Yrene. They are both such enjoyable characters, and I especially loved watching the way Nesryn came to life when she finally got to come home. There’s a lot of talk about her feeling out of place at first, but she quickly comes to realize that she’s been welcomed into her homeland with open arms by almost everyone she meets, and it means so much to her that it’s incredibly heart-warming. They’re both strong-willed, independent women who could take on just about anything, whether it’s through Nesryn’s archery or Yrene’s healing, and I cherished them both tremendously.

“I think she was a god… I never learned her name. She only left a note with two lines. ‘For wherever you need to go—and then some. The world needs more healers.’”

We also meet quite a few new characters in this installment, as well as seeing some old faces (this would be a good time to tell you that it’s practically a requirement to read the Assassin’s Blade novellas before picking up Tower of Dawn!). I’ve mentioned this before, but I am a sucker for storylines that rally together all of the older, minor characters in the end, and Maas does that beautifully in both Empire of Storms and in this book. I especially loved watching certain puzzle pieces fall into place for characters (as in the scene with Chaol and Yrene at the end of the book that literally made me weep over how much I love Aelin).

Some swore the cats had been caught pawing through the pages of open books—reading.

One thing I want to address, though, that made this a 4.5 instead of a solid 5 for me, is the fact that it was originally intended to be a novella, and then was almost 700 pages in the end. On the one hand, I do think this book is longer than it should be—but on the other hand, a novella length wouldn’t have fit everything in, either! I think something in the 450-500 page range would have been a much better length, but it’s not a big complaint from me, as I’d always rather a book be a little too long than way too short and rushed.

And finally, because a lot of people have asked me in the few days since I finished reading this: is this book required reading for the series? YES. There are reveals in Tower of Dawn that are freaking HUGE for the series as a whole, plus there is so much character development that I honestly think you can’t afford to miss it. If you’re one of the series fans who simply refuses to read this, please, at least get a full-spoiler recap from someone! There’s just too much to miss.

Book Lovers by Emily Henry
Visit my shelf on Goodreads!