TITLE: Undead Girl Gang
AUTHOR: Lily Anderson
RELEASES: May 8th, 2018; Razorbill
GENRE: Mystery
AGE RANGE: YA
SYNOPSIS: Veronica Mars meets The Craft when a teen girl investigates the suspicious deaths of three classmates and accidentally ends up bringing them back to life to form a hilariously unlikely–and unwilling–vigilante girl gang.
Meet teenage Wiccan Mila Flores, who truly could not care less what you think about her Doc Martens, her attitude, or her weight because she knows that, no matter what, her BFF Riley is right by her side.
So when Riley and Fairmont Academy mean girls June Phelan-Park and Dayton Nesseth die under suspicious circumstances, Mila refuses to believe everyone’s explanation that her BFF was involved in a suicide pact. Instead, armed with a tube of lip gloss and an ancient grimoire, Mila does the unthinkable to uncover the truth: she brings the girls back to life.
Unfortunately, Riley, June, and Dayton have no recollection of their murders. But they do have unfinished business to attend to. Now, with only seven days until the spell wears off and the girls return to their graves, Mila must wrangle the distracted group of undead teens and work fast to discover their murderer…before the killer strikes again.

If I can recommend one YA mystery to you, it’s this one. I’m honestly not usually a big fan of YA mysteries—most of them fall short for me in a big way—but this was such a wildly enjoyable, hilarious, heartbreaking, and gorgeous little story. While most mystery novels are about the destination (discovering the whodunit), this one is about the journey, and the things Mila learns along the way. It’s about grieving, friendship, overcoming your judgments, and so much more.

I did big, real magic using a bunch of flowers and an old-ass book, and I feel just as lonely now as I did when my best friend was dead.

It’s rare that I read a book that can present gallows humor in a solid way, but it’s fantastic in this narrative, and as someone whose humor tends to lean on the incredibly morbid and dry side, I honestly adored Mila. I feel like she and I would legitimately be best friends and I’m a little bit sad that she’s not an actual human being, in my life.

Two days is a long time when you can’t sleep or eat because remembering that your best friend is gone slams into you whenever you think you’re safe from it.

Of course, there’s also a tremendous amount of sadness in Undead Girl Gang; after all, we’re talking about teenagers dropping like flies, and not only that, but we’re dealing with the narrator’s own best friend of several years being one of those teens. I was taken aback a few times by how palpable Mila’s grief was, especially mingled with the desperation she has to convince the adults in her life that these girls didn’t kill themselves.

I’m so tired of adults using hyperbole to try to keep me in my place. I’m not crazy. I’m not too angry. I’m fine just the way I am.

Of course, there’s a lot of happiness and important conversation to be had in this story, too. We get to watch two of the school’s “mean girls” come to terms with their own abusive behaviors, and any potential for girl on girl hate is squashed quickly, as Mila is an incredibly forgiving and considerate person beneath her sarcasm and rage. I loved watching her friendships with June and Dayton unfold.

Is it possible to be a pagan agnostic?

I gotta admit, as soon as I heard about this book’s rep, I was so stoked. I learned it had Wicca in it, too, and I was sold! I practiced Wicca for years as a teen, and while I don’t practice it anymore, it’s still something that I so rarely see portrayed in a positive light that I get truly eager whenever I see its representation done well. Every person’s experience is different, but I truly enjoyed the Wiccan rep in this book and related really well to it.

“And, for fuck’s sake, stop using ‘normal’ as code for ‘white’,” I snap. “Your life isn’t the ruler that the rest of the world gets measured against.”

As a white woman, I obviously cannot relate to the Latinx rep in this book, or the black rep for one of the side characters, but as the author is Afro-Latinx, I can only say that I loved reading her portrayal of some of the feelings she might go through in a world where so much of society still views “white” and “normal” alongside one another.

“So you… what? Wanna start the fat brown girl clique?”
She cocks her head at me. “Doesn’t that sound dope as hell?”

The last thing I’ll say about the rep is that, as a plus size woman, I was able to relate really hard to the fat rep in this book, and I LIVED for it! I read so few books with plus size protagonists, and it’s even more rare for the rep to be done in a positive and thoughtful light, but this was perfect. As this, too, is own-voice rep, Lily Anderson does an impeccable job of describing so many of the daily microaggressions and difficulties that we deal with, and I was over the moon for it. If you’re a plus size reader looking for a book that mirrors your life experiences—or a non-plus size reader looking for an opportunity to empathize with what others go through on a daily basis—I highly recommend giving this book a try.

Buddy read with the ever so lovely Taylor! ♡

All quotes come from an advance copy and may not match the final release. Thank you so much to Razorbill for providing me with this ARC in exchange for an honest review! 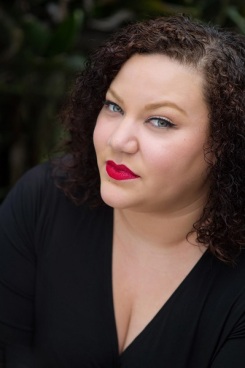 Lily Anderson is a school librarian and Melvil Dewey fangirl with an ever-growing collection of musical theater tattoos and Harry Potter ephemera. She lives in Northern California. She is also the author of THE ONLY THING WORSE THAN ME IS YOU and NOT NOW, NOT EVER. She tweets @ms_lilyanderson.

Dear Medusa (A Novel in Verse) by Olivia A. Cole

The Undertaking of Hart and Mercy by Megan Bannen

The Ghosts That Haunt Me: Memories of a Homicide Detective by Steve Ryan
Visit my shelf on Goodreads!

okay, it's time once again - if you're an author/agent/editor/marketer/publicist with a horror/horror-adjacent/gothic/weird book publishing in 2023, let me know! I'm starting in on my 2023 horror masterlist 🥴

Had so much fun playing Salt 2 tonight! @lavabootsstudio has such a gem on their hands! The game is so relaxing and atmospheric! I'm excited to see what the future holds for this indie gem!!!

In 2020, Gunn tweeted that he “tried” to make Velma a lesbian: "In 2001 Velma was explicitly gay in my initial script. But the studio just kept watering it down & watering it down." https://bit.ly/3Szs1xn

Velma is officially a lesbian.

Clips from the new movie “Trick or Treat Scooby-Doo!,” which show the Mystery Inc. member googly-eyed when encountering costume designer Coco Diablo, have gone viral, confirming suspicions held by the fan base for decades. https://bit.ly/3Szs1xn

I see the bookstore owner is in my mentions.

Just so we're clear, my publicist & I both asked for an explanation and didn't get one. Hurricane Ian was never mentioned. Here's what actually happened:

Trying not to 😭 but I just left my book launch event where they had 0 copies of my book in stock...