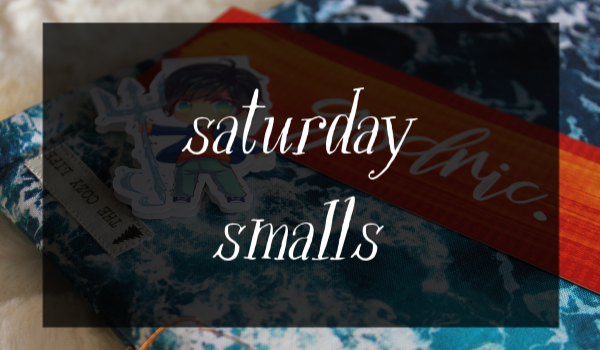 TITLE: Rafe (Loose Ends, #1)
AUTHOR: Rebekah Weatherspoon
GENRE: Romance
FORMAT: eBook
AGE RANGE: Adult
PAGES: 259pg
SOURCE: The “Feel Better” Bundle
After a nasty divorce and a thousand mile move, Dr. Sloan Copeland and her twin daughters are finally getting the hang of their new life in Los Angeles. When their live-in nanny bails with no warning, Sloan is left scrambling to find a competent caretaker to wrangle her smart, sensitive girls. Nothing less will do.
Enter Rafe Whitcomb. He’s all of those things, not to mention good-natured and one heck of a whiz in the kitchen. He’s also tall, and handsome, and bearded, and ripped, and tatted, wrist to neck.
It doesn’t take long for the Copelands to invite Rafe into their home. Just as quickly, both Sloan and Rafe find themselves succumbing to a heady mutual attraction, neither of them wants to deny. With every minute they spend under the same roof, this working mom can’t help but wonder if Rafe can handle all her needs…

Sigh. Don’t get me wrong. 3.5 stars is not a bad rating. It’s just that this book was one of my most anticipated reads and I was so convinced that I would adore everything about it, and instead, it fell short in so many ways.

?‍♀️ I wanted to adore this, but sadly, I couldn’t. I’ll probably give the author another chance, but I won’t be rushing to do so. I’m disappointed to say that I feel “meh” enough about this that, even though I loved Xeni, I… don’t even really care about reading her book in this series? 🙁

TITLE: Dine with Me
AUTHOR: Layla Reyne
GENRE: Romance
FORMAT: eARC
AGE RANGE: Adult
PAGES: 205pg
SOURCE: NetGalley
Miller Sykes’s meteoric rise to award-winning chef is the stuff of culinary dreams, but it’s all crashing down around him. He’s been given a diagnosis that could cost him something even more precious than his life: his sense of taste. Rather than risk the very thing that defines him, Miller embarks on a last tour of his favorite meals while he still can. But there’s a catch: he needs a financial backer to make it happen, and he doesn’t want anyone to know he’s sick.
Dr. Clancy Rhodes has two weeks to come to terms with putting aside oncology to work at his father’s thriving plastic surgery practice. When the opportunity to travel with a Michelin-starred chef presents itself, the foodie in him can’t believe it. It doesn’t hurt that Miller’s rugged good looks are exactly Clancy’s cup of joe.
As Clancy and Miller travel from coast to coast and indulge in everything from dive bars to the most decadent of culinary experiences, they’re suddenly sharing a lot more than delicious meals. Sparks fly as they bond over their love of flavors and the pressures of great expectations. But when Miller’s health takes a turn for the worse, Clancy must convince him he’s more—so much more—than just his taste buds. And that together, they can win a battle that once seemed hopeless.

I’m not rating this because a) I didn’t get far enough in to justify it, and b) it may just be a total preference thing, because frankly, I could see a lot of people loving this book! That said, despite how excited for it I was and how convinced I was that I’d enjoy it, this did not work for me at all. It was an absolute chore to even reach the 32% mark because I was so miserably bored.

These characters feel tremendously one-dimensional, I’m having the worst time trying to actually believe anything about this entire situation (and normally I’m pretty good at suspending disbelief!), I don’t sense any genuine chemistry between the characters besides “wow, he’s so hot!”, and most of all… y’all, I love food, I can spend entire days lost in cooking shows and competitions, I adore cooking, the whole works… but clearly I don’t like the right kind of food for this book, because I seriously had to force myself not to start skipping entire paragraphs every time Miller and Clancy sat down for a meal. It just felt so forced and like it was trying so hard to make up for the total lack of depth in the characters and their actual romance.

Sigh. I feel horrible writing this review. I wanted so badly to love this book and I know there’s a better audience out there for it than me, but I just really couldn’t find anything redeeming here.

Miller and Clancy are both gay (though it is implied that Miller was bi or pan until recently).

TITLE: The (Alien) Nanny for Christmas
AUTHOR: Amanda Milo
GENRE: Romance
FORMAT: eBook
AGE RANGE: Adult
PAGES: 123pg
SOURCE: Kindle Unlimited
Hi. I’m Gwen. I’m a single mom to two growing boys—and now I’m the brand new owner of an alien whose greatest wish in life is to become a live-in nanny. It’s been kind of a weird day.
I wholeheartedly recommend adding an alien to your household though. He cooks, he cleans—and the kids love him.
But three things you should know if you’re going to keep a seven-foot-tall alien in your basement?
You might want to invest in flameproof cookware.
He will think of you as his planet’s equivalent of a princess.
And my alien is totally stealing my underwear.

I don’t even have words for how freaking cute this novella was. I honestly felt super skeptical because I didn’t think I’d be into alien romance as a subgenre (this was my first… unless you count weird fanfics I read as a kid), and yeah, I mean, the description of Mitteeku with his scales and spikes and all — well, I wasn’t swooning over the visual, but that really doesn’t matter because he is so precious and an absolute treasure!

I seriously don’t remember the last book that made me laugh out loud this much. Whether it’s Mitteeku’s struggles with translations and adapting to human life, or his bewilderment at the toddler’s “bloodthirst” RE: stuffed animals, or the fact that THE BABY STARTS TO MIMIC HIS GROWLS?? I’m giggling just thinking back on it.

So, if you’re open to alien romance, and looking for a hilarious and sweet Christmas novella, I highly recommend this one. I had such a fun time reading it and I can 100% see myself picking up more of Amanda Milo’s works in the very near future. Thank you to Sionna for recommending this one to me! ♥♥ 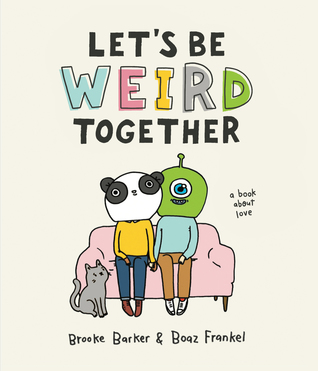 TITLE: Let’s Be Weird Together: A Book About Love
AUTHOR: Brooke Barker
GENRE: Nonfiction/Humor/Romance
FORMAT: Comics
AGE RANGE: Adult
PAGES: 112pg
SOURCE: NetGalley
This is a book about weird couples and the tiny two-person universes they create.It’s about accidentally wearing the exact same outfit. It’s about made-up songs. It’s about your rules for the thermostat. It’s about breakfast rituals, and funny nicknames, and long hugs, and that voice you pretend the cat has. If you’re half of a weird couple, or if you have a favorite weird couple, or if you just love love, this book is for you.

Let’s Be Weird Together is cute and a little amusing, but… well, for lack of a better way to say this, it feels very shallow and basic to me. Lots of the humor is “cute”, but nothing is outright funny; many panels are sweet, but none of it warmed my heart or made me feel much of anything. Sure, I was able to equate a lot of it to myself and my spouse, and that was nice, but I can’t see myself recommending or purchasing a finished copy of this book in the future. 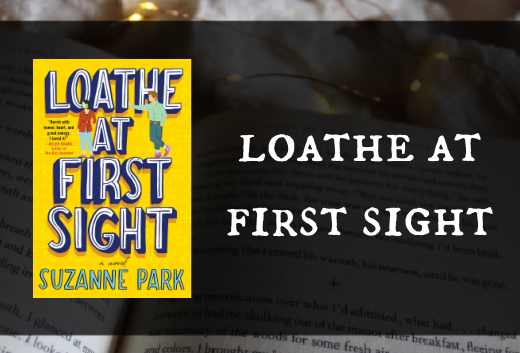