The Spooky "Would You Rather" Tag

Thank you so much to my horror bestie and twin in spooky stuff, Heather, for tagging me in this tag! Her blog is amazing and she produces so much quality content (not just horror-themed, but there’s plenty of that, too), and she’s just the sweetest, so go check her out if you’re not already following her!

This tag was originally created by The Book Pusher over on YouTube!

I love both, but I have to go with supernatural. I love ghost stories and things of the like, plus I’m really picky about thrillers!

Definitely ghosts! I don’t read zombie books too often, though I was so obsessed with them in my mid- to late-teens that I earned the nickname “Tiny Zombie” from a ton of my friends (it’s still my username for a few sites, too)! 😂

This is tough, because I feel like they should always go hand in hand! I’m actually low key disappointed when I read a book featuring one group and then find out it doesn’t include the other. I think it’s just because the PNR and urban fantasy I loved as a kid always included both!

(for the record, though, #TeamJacob for life)

Mmm, this is tough. Being of a witchy inclination myself, I love certain portrayals of witches (like many of the stories in Toil & Trouble, review here), but when it comes to horror, demons are way scarier!

5. would you rather read a book with 13 chapters, or a book with a black cat on the cover?

I mean, I wouldn’t hesitate to pick up either (I love black cats, and 13 is one of my lucky numbers), but seeing as this question first made me think of Mr. Kindly from Nevernight, I’ll go with black cats!

6. would you rather read a spooky book in the dark with only a candle for light, or by yourself in a locked brightly lit room?

7. would you rather face your worst fears, or be trapped in the mind of a killer?

This is… tough. I have a few legitimate phobias, to the degree that being forced to face them would cause me a severe amount of mental trauma, but being trapped in the mind of a killer would really fuck you up in the head, too, right? Uh… PASS?!

8. would you rather watch a scary movie or read a scary book?

I love both SO MUCH, but… honestly, I think I have to go with movies for this (don’t look at me like that!). Horror films are my #1 source of comfort as far as hobbies/pasttimes go.

Several years ago, while in a really, REALLY bad depressive slump, I spent an entire two-month break between semesters binge watching horror movies all day, every day. It was the only thing that was able to get me out of bed every day, so I’ve gotta give credit where it’s due.

9. would you rather read spooky books during the fall time or all year?

I mean, I already read them all year? I think I’m more inclined to pick them up in the colder months because they’re oddly cozy and comforting to me (I can’t explain it, I know it sounds weird, haha!), but I am definitely not the type of reader who only picks up horror in October. Let me tell you, I LOVE a good Christmas horror…

I’m going to read this as “read 10 spooky books in October, and then however many you want the rest of the year”, because that’s really what sounds best to me. All the horror, all the time.

If you’re reading this and want to fill out this tag, consider yourself tagged! 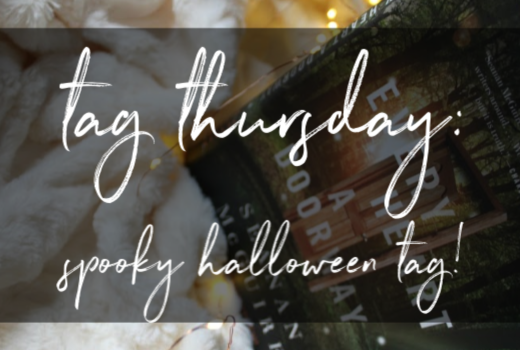